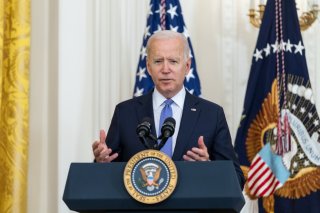 Women’s basketball star Brittney Griner, who was detained in Russia on alleged drug charges, has made a direct appeal for her freedom in a handwritten letter to President Joe Biden.

Meanwhile, Griner’s family and supporters have for weeks tried to ratchet up pressure on the White House and the U.S. State Department to negotiate a trade that would bring her home. “As I sit here in a Russian prison, alone with my thoughts and without the protection of my wife, family, friends, Olympic jersey, or any accomplishments, I'm terrified I might be here forever,” an excerpt of the letter read.

“On the 4th of July, our family normally honors the service of those who fought for our freedom, including my father who is a Vietnam War Veteran. It hurts thinking about how I usually celebrate this day because freedom means something completely different to me this year,” it continued.

The White House responded by saying that Biden has read Griner's letter, and that the president will do everything in his power to get her home. “We are going to use every tool we possibly can to make that happen,” White House press secretary Karine Jean-Pierre told reporters on Tuesday. “This is very personal to him.”

On Wednesday, Biden and Vice President Kamala Harris spoke by phone with Cherelle Griner, the wife of Brittney Griner. “The President called Cherelle to reassure her that he is working to secure Brittney's release as soon as possible, as well as the release of Paul Whelan and other U.S. nationals who are wrongfully detained or held hostage in Russia and around the world. He also read her a draft of the letter the President is sending to Brittney Griner today,” the White House said, according to CNN.

Griner was detained at Sheremetyevo International Airport on February 17 after the Russian Federal Customs Service claimed to have found vape cartridges containing the marijuana concentrate hashish oil in her luggage. According to the New York Times, Griner has been charged with “large-scale transportation of drugs, an offense that can carry a sentence of up to ten years behind bars in Russia.”

“It blew my mind because I'm like large-scale? I live with B.G. every day, and so there's no way possible. So I knew it wasn't true the minute that I heard the charge because I know my wife. I'm like, no,” Cherelle told “CBS Mornings” on Wednesday. “It's very unfortunate, you know, that she's in this position because B.G. does not large-scale do anything in traffic of drugs. It was very, very hard to hear that charge,” she continued.

After 130 days of detention, Griner’s trial began on July 1. According to the Russian news agency TASS, Griner declined to enter a plea. The trial is expected to continue on July 7 after a delay due to the absence of two witnesses.