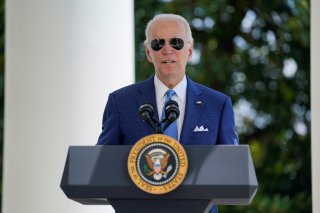 As part of the American Rescue Plan Act that passed in March 2021, Congress passed a new, expanded child tax credit. Among other provisions, the credit mandated monthly payments for the last six months of 2021 to most American families.

The policy succeeded in its stated goal of dramatically reducing child poverty in the United States.

The credit, however, did not last that year, as the Build Back Better bill did not pass, and the child tax credit reverted to its previous version in 2022, without the monthly check.

The HuffPost this week looked at the question of why Democrats have not talked about this successful policy on the campaign trail.

“The allowance lasted only six months, and the triumphant messages have been largely absent from the campaign trail ahead of next week's midterm elections, in which Republicans stand a strong chance of winning one or both chambers of Congress,” the story said.

The Democrats, HuffPost noticed, have been more likely to talk about Social Security than the child tax credit. The publication cited a study by the Wesleyan Media Project showing that just 0.2 percent of federal campaign ads in the generation election have mentioned the child tax credit.

Some candidates have aired commercials dinging opponents for opposing the credit, while others have ripped supporters of the child tax credit for credits going to convicted felons.

Sen. Michael Bennet (D-CO) is a rare candidate who has been talking up his support for the child tax credit.

There are a couple of other reasons why politicians may have distanced themselves from the expanded child tax credit. There’s the simple fact that Democrats were not able to keep the credit going, and advertising it would publicize a failure. Also, there is the belief among some that the credit, along with stimulus checks, helped bring about inflation, which has been a major issue in this fall’s campaign.