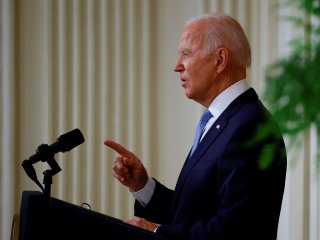 As President Joe Biden enters his eighth month in office, his tenure has already been one of the most eventful—and controversial—starts to a presidency in recent history. In addition to overseeing the passage of the American Rescue Plan Act, a significant piece of coronavirus relief legislation that both provided for a third round of stimulus checks and expanded the ongoing Child Tax Credit, and shepherding a pair of infrastructure bills through Congress, Biden oversaw the chaotic withdrawal from Afghanistan—a withdrawal that led to the Taliban takeover of the country within weeks. As the consequences of that withdrawal have become clear, Biden’s approval rating has dropped significantly, and the president seems eager to close the book on Afghanistan and move on to another issue.

One such issue could be Social Security, whose impending doom was officially moved forward by a year, to 2034.

Social Security retirement benefits are paid for through a trust fund operated by the Social Security Administration, the government agency tasked with providing benefits to more than 65 million elderly Americans. For much of its existence, Social Security was more than paid for by payroll taxes; the excess was deposited into the trust fund, which was invested in U.S. Treasury bonds to enlarge the payouts.

However, as most members of the “baby boomer” generation have retired, they have stopped paying into the system and started to collect benefits. As this has happened, the trust fund shifted, gradually losing money each year. Prior to the pandemic, it was slated to run out in 2035; the loss of a year can largely be blamed on the pandemic, which caused millions of Americans to lose their jobs—and hence, the Social Security Administration its tax dollars—and incentivized millions more to retire early and collect the benefits during the pandemic, exacerbating the shortfall.

On the campaign trail, Biden promised to increase Social Security, guaranteeing that the minimum benefit given would be equal to at least 125 percent of the federal poverty level. Biden’s proposal also included a 20 percent raise for widows and widowers, and a 5 percent increase for Americans who had been receiving the payments for 20 years or longer.

To cover the cost of these increases, and help plug the gap, Biden promised to increase the ceiling for Social Security payroll taxes from $142,800, its current level, to $400,000. This will likely be opposed by Republicans on Capitol Hill, who tend towards fiscal conservatism and would object to further tax increases.

Therefore, a more pertinent question is whether Biden will succeed at reforming Social Security—as previous presidents have tried, and ultimately failed.