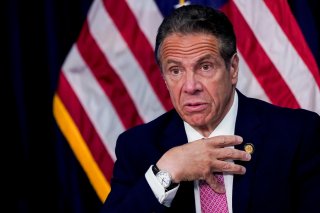 The Democrat-controlled New York State Assembly appears poised to move forward with impeachment proceedings against Gov. Andrew Cuomo, a fellow Democrat, after a scathing report from the state Attorney General’s Office concluded that he sexually harassed at least 11 women in the state workforce.

A defiant Cuomo again denied the allegations and said he would never resign.

“It is abundantly clear to me that the governor has lost the confidence of the Assembly Democratic majority and that he can no longer remain in office,” Assembly Speaker Carl Heastie said in a formal statement Tuesday. “Once we receive all relevant documents and evidence from the attorney general, we will move expeditiously and look to conclude our impeachment investigation as quickly as possible.”

Here are four key elements to watch as the impeachment drama in Albany unfolds.

1. What Are Cuomo’s Chances for Political Survival?

Fifty-nine percent of  New Yorkers, including 52% of Democrats, say they want Cuomo to resign, a Marist Poll conducted Wednesday found.

About the same number say the Democratic governor should be impeached and removed if he doesn’t resign. Fewer than one-third of New Yorkers surveyed say Cuomo, 63, should serve out his third four-year term.

It may look bad for Cuomo now, as nearly every major Democrat at the state and national level has abandoned him.

However, the governor’s fate may not be sealed, said Ross Garber, a lawyer who specializes in political investigations and impeachment and teaches at Tulane Law School.

“I would expect he and his family—which have been involved in New York politics for a long time—will think this through and take it as it’s coming,” said Garber, who previously represented four governors who faced state impeachment investigations in Connecticut, South Carolina, Alabama, and Missouri.

An impeachment process is not without peril for the Legislature, Garber noted, as New York’s Democratic leaders would face the prospect of removing the longtime leader of their party.

It seems difficult now to see how Cuomo would remain as governor, said Adam Weiss, a Republican political strategist in New York and CEO of AMW Public Relations in New York City.

“I don’t think he can survive. He doesn’t have any political capital left,” Weiss said. “Who are his political friends? It’s what happens when you spend years bullying people on your own side. You get in a lot of trouble with legislators, who now have big smiles on their faces.”

That said, Weiss added, there might be no political price to pay for Assembly Democrats if they don’t vote for impeachment—while a two-thirds majority necessary to convict in an impeachment trial is still a big hurdle.

“From the public, yes, there will be a price, but from the ballot box no,” Weiss said. “Incumbents almost never lose in New York. Democrats have heavy majorities in urban areas and no matter how the incumbents vote or what they say, they almost always get reelected.”

2. Who Will Emerge as Political Stars?

Impeachment hearings for Cuomo in the New York Assembly’s Judiciary Committee, along with a potential trial in the state’s High Court of Impeachment, likely would garner immense media attention to Albany, making state-level players into national names.

The biggest rising star already is James, the state attorney general, after her release of the investigators’ report, and she likely will gain more attention during the process, Weiss said.

“Letitia James is becoming a national figure. She did the report and she is popular with the base for her attacks on President [Donald] Trump,” Weiss said. “She is loved by the media too, because the Cuomo report makes her look independent, even if she has her own political motives.”

Heastie, speaker of the Assembly and a Democrat who represents the Bronx, is the state’s first African American speaker (and the 100th speaker overall), also could emerge as a major national player.

“Speakers are big players in their state, whether it’s New York, California, or South Dakota,” Weiss said. “But they are rarely national figures like governors can be. But as this impeachment gains national media attention, Heastie could become a nationally known figure.”

“We are reviewing the attorney general’s extensive report documenting sexual harassment and misconduct committed by Governor Cuomo. The findings are extraordinarily disturbing,” Lavine said in a public statement, adding:

The details provided by the victims are repugnant. The report is being studied by the members of the Judiciary Committee and every member of the Assembly. We are engaged in an intensive analysis of the report and its exhibits with our Assembly counsels and with our independent counsel, Davis Polk & Wardwell.

3. How Is Impeachment Different in New York?

The most recent frame of reference for most Americans on impeachment was provided by the two cases against Donald Trump in late 2019 and early 2021. Trump was acquitted in both Senate trials.

Before that, going back two decades, Clinton was impeached by the House in 1998 but later acquitted by the Senate.

Similar to a federal impeachment, it takes only a simple majority vote of the 150-member New York State Assembly—the state’s equivalent of the U.S. House of Representatives—to approve articles of impeachment.

Unlike Clinton, Trump, and President Andrew Johnson, an impeached New York governor doesn’t continue business as usual unless he is acquitted. In the meantime, in the case of Cuomo, Lt. Gov. Kathy Hochul would become acting governor.

“In New York, a governor has to step aside after they have been impeached and while the trial is taking place,” Garber said. “So the lieutenant governor is the acting governor until the trial is over.”

Further, unlike in federal impeachments, the New York State Senate alone doesn’t hear the case. Instead, the trial is conducted by all but one state senator, plus seven members of the state’s highest appeals court. This combination of judges and senators is called the High Court of Impeachment.

The only state senator who would not be involved in a trial is Senate Majority Leader Andrea Stewart-Cousins, D-Yonkers, who immediately would become acting lieutenant governor.

Legislators will have to determine specific rules and procedures beyond what is stated broadly in law.

“The two Trump impeachments had procedures that were very different,” Garber said. “One had committee hearings, the other went straight to a floor vote. There is a fair amount of diversity in how states do it.”

Only one New York governor so far has been impeached: Democrat William Sulzer in 1913, on charges that he used campaign money in the stock market.

Sulzer also faced his own party, but had been elected as an anti-Tammany Hall reformer. The forces of Tammany Hall, then the state’s most powerful Democrat political machine, pushed back by impeaching and ousting him.

“It’s unclear what rules the Legislature would follow,” Garber said. “Many people think the previous impeachment was largely political. There have been a number of gubernatorial impeachments [in other states] since then.”

4. What About COVID-19 Nursing Home Deaths?

The Cuomo administration’s misinformation about COVID-19 deaths and policy of sending patients back to nursing homes first prompted talk of impeachment, even among fellow Democrats.

Although the attorney general’s report on the sexual harassment cases garnered more attention recently, the nursing home scandal could still be key to the impeachment case.

James determined in February, as did The Associated Press, that the Cuomo administration was underreporting COVID-19 deaths in nursing homes by about half the actual number of 15,000.

The U.S. Justice Department’s Civil Rights Division announced recently that it would drop its probe of Cuomo. However, the FBI and federal prosecutors in Brooklyn are probing whether the state intentionally manipulated nursing home death data.

The Assembly’s Democrat leaders reportedly debated for hours in a virtual meeting about moving forward on impeachment with a wide-ranging investigation to include the alleged sexual misconduct and the lack of transparency over several months regarding the COVID-19 deaths in nursing homes that resulted from Cuomo’s executive order.