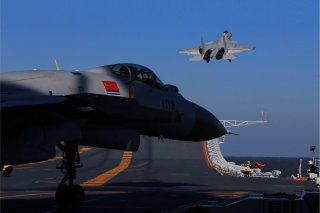 Here's What You Need to Remember: Countering great power A2/AD threats, whether in Europe or the Western Pacific, will require an array of assets. But deterring or defeating Russian and Chinese threats to U.S. friends, allies and interests must be based, first and foremost, on a robust, highly lethal and survivable forward deployment of U.S. forces.

A large portion of the U.S. defense establishment is operating under the mistaken belief that a future conflict involving a great or middle power in the Pacific will be a long-range missile duel.

U.S. competitors, particularly Russia and China, are building large-scale networks of anti-access and area denial capabilities intended to deny U.S. air and naval forces access to Eastern Europe and the islands of the Western Pacific. As a result, according to many experts, U.S. military capabilities—particularly major platforms and fixed installations—will be vulnerable to long-range missiles strikes. Hence, U.S. power projection forces would be required to operate at great distances from the actual theaters of war, forced to conduct a “rollback” campaign to degrade the adversary’s A2/AD network, prior to seeking to move forward to liberate territories the adversary has occupied. Because of their advantages in proximity to their targets and local military superiority, Russia and China could realize their operational objectives before the U.S. could even implement a strategy of employing long-range fires to degrade opposing A2/AD networks.

So convinced are the U.S. Navy and Marine Corps that long-range missiles will dominate future conflict that they are prepared to cede the Western Pacific to China at the start of a conflict. The Navy has a new surface warfare strategy called Distributed Lethality to fight from afar based on dispersed formations across a wide expanse of geography. The Marine Corps is pursuing a new approach to amphibious warfare based on the belief that the proliferation of A2/AD threats makes large-scale forcible entry operations a thing of the past.