AI Will Transform How The Air Force's Next Stealth Fighter Fights 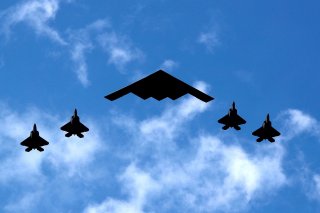 Should the Air Force and Navy prioritize the engineering of an entirely new platform with paradigm-changing technologies for a 6th-Generation fighter, or simply keep upgrading the state of the art 5th-Gen aircraft in the near term?

These questions seem to be informing the current Navy-Air Force rationale, which is to look at both new airframes as well as adaptations of the best of what’s available. The latter option brings its own advantages, because various industry developers are already building prototypes of 6th-Gen fighters with newly designed, stealthier airframes.

Looking at applications of AI, miniaturized long-range sensors, targeting technology and drones operating with improving autonomy lead some to contend that perhaps some of the most essential ingredients of some of the long-term transformational technologies are, in effect, already here to varying extents. This would be the basis upon which a nearer-term aircraft, drawing from some off-the-shelf-items, would be pursued.

There is widespread consensus that applications of AI appear to provide the framework for the most defining expected technological progress. For instance, a 2017 paper from a sixteen-nation NATO conglomerate of analysts, called the Joint Air Power Competence Center, raises questions about when, and how, AI may outpace the human ability to keep up. The essay, titled “Air Warfare Communication in a Networked Environment,” quotes Air Force Acquisition Executive William Roper from his previous role directing the Pentagon’s Strategic Capabilities Office, saying “AI is progressing beyond the human ability to interface with it.”

“Smart sensors and smart antenna arrays with adaptive properties would be embedded into the structure of an aircraft,” a paper from Jain University’s International Institute for Aerospace Engineering states.

At the same time, while massive increases in sensor ranges, data-sharing and long-range connectivity will continue to bring as-of-yet unprecedented advantages to warfare operations, there are also challenges. Problems will emerge as combat becomes more networked. Referring to this phenomenon as creating clusters of “embedded ISR,” the Joint Air Power Competence Center paper warns of security risks from what it calls “hyper-connectivity.”

AI-informed combat decisions, enabled by accelerated real-time analytics, allow human decision makers to draw upon otherwise inaccessible pools of data. Algorithms can integrate new information, instantly compare it against vast amounts of stored data, and come to informed conclusions without requiring human intervention. Often referred to as easing the “cognitive burden,” AI and iterations of man-machine interface, can perform time-consuming or otherwise impossible information-analysis tasks, all while a human functions as ultimate decision-maker in a command and control role. While AI is quickly advancing toward being able to discern and organize seemingly subjective information, there are many decision-making abilities and problem solving faculties regarded as unique to human cognition.