The Air Force Is Adapting Its Squadrons to Crush China 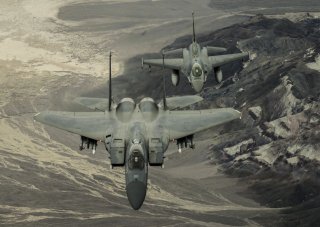 Here's What You Need to Remember: The flying branch is bettering that it can chop up its 20-plane fighter squadrons into detachments of four or six planes, pair them up with transports and maintainers and send them far and away to do battle without top-down management.

The U.S. Air Force is rewriting its war plan for the Pacific, the flying branch's new commander for the region told reporters at the Pentagon in late November of 2018.