All of America's Expensive Weapons Are Useless Without This One System 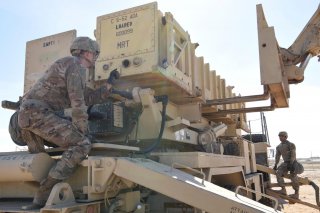 "None of this is going to matter if you're dead.  And that's why you need air defense."  General Mark Milley, then U.S. Army Chief of Staff, said those words as he defined the Army's six modernization priorities in October of 2017.  General Milley's remarks are spot-on and recent combat operations in the Ukraine, Syria, and Southwest Asia validate them.  His words clearly state that air and missile defense (AMD) is No. 5 on his list of six modernization priorities, but air and missile defense is not his second to last priority - it is the pre-eminent priority, on a list of few, which mandates resourcing.  That is a point which must resonate with all.

America's adversaries have invested in low-cost, simple air forces and capabilities.  All the while, the U.S. has neglected our ground-based air defense force, in the belief that our air forces were omnipotent.

Combat operations have proven our assumptions to be wrong.  We have accepted extreme risk in the air and missile defense force and must ensure its modernization does not become a COVID-19 fatality.  Another Army Chief of Staff often said, “You can't fix a problem, once the crisis has begun.”  We have an air and missile defense problem that requires priority in resourcing now, before we find ourselves in a crisis with inadequate defensive capability.

Today, if you cannot defend yourself from aerial observation or attack, you will not survive and all of the tanks, artillery, and aircraft the Pentagon has invested in will be of little value or use.  If the warfighter cannot defeat a complex aerial attack, the U.S.' strategic, operational, and tactical assets and objectives, are at extreme risk.  Without air and missile defense, a force cannot enter or effectively operate in any combat environment.  It is fair to say the threat is presently focusing more on relatively inexpensive air and missile systems than on major land, sea, and air programs of the past.

In fact, the air and missile threat has continued to expand at both ends of its operational spectrum.  Unmanned aerial systems (UAS) are common use by near-peers, as well as non-state actors.  The rocket is the indirect fire weapon of choice for most non-state actors, and the U.S. simply cannot ignore the Houthis' use of ballistic and cruise missiles.

We cannot disregard the lessons of the 2019 cruise missile and UAS attack on the Saudi ARAMCO facility, nor dismiss Iran's ballistic missile attacks on U.S. bases at Al Asad and Erbil.  Were those intentional misses or the randomness of circular error probabilities?  If intentional misses, then the lesson is that the adversary has fairly accurate missiles.  If the impact points were simply the result of circular error probabilities, we must note that those warheads pack a serious punch and that the U.S. was lucky.

Do we want to rely on luck in the future?

The variety of threats is increasing, enabling more complex attacks, and challenging our defense designs.  We are vulnerable to 360-degree attacks.  In addition, the warfighter must counter high- and low-altitude attack profiles, presented by small, low-radar cross section long-range aerial reconnaissance and weapon systems, while simultaneously defeating maneuvering ballistic missiles with closing velocities measured in thousands of meters per second.  Our forces must also ensure our aviation and air forces can safely operate in the airspace.

Put simply, one-trick-ponies, operating in isolation with stove-piped architectures, will not survive in today's air and missile fight, nor do they enhance friendly air operations.

Today's environment requires an integrated approach to air and missile defense.  Air and missile defense operations are inherently joint and combined, requiring a versatile and flexible architecture that leverages all available information and engagement capabilities.  An integrated approach enables us to achieve the tenets of air defense:  unity of command, unity of effort, centralized planning and direction, and decentralized execution.  Stove-pipe systems and parochialism are obstacles to achieving these tenets, as are foreign disclosure policies that prohibit allies and partners from seamlessly operating in our architecture.

Forward Progress and the New Challenge

General Milley also said in 2017, "We will reform our entire battlefield air and missile defense capability...which has tragically atrophied over the years.”  As one of the Army's original six modernization priorities, the Army has moved aggressively to rebuild the Army's air and missile defense capabilities.  Key initiatives include reestablishing a short-range air defense (SHORAD) force and capability, while continuing to improve capabilities to counter the cruise and ballistic missile threat; addressing the 360-degree threat aspect; and achieving an integrated air defense command and control capability which optimizes capabilities, while simultaneously mitigating the potential for fratricide.

Now, as the Department of Defense faces a potential budget reduction to pay for COVID-19 response, the Army will have to make tough decisions.  As the Army weighs its decisions, it should not lose sight of General Milley's words, nor ignore the excessive risk it has accepted by allowing its air and missile defense capability to "tragically atrophy."  The Army has made significant progress on many air and missile defense initiatives and must continue to focus and resource those programs to ensure it can open, operate, and survive in any combat theater.

The Maneuver-SHORAD (M-SHORAD) capability is critical to forward area and maneuver force operations and begins to fill the gap past modularity efforts created.  Its on-board sensor suite and ability to network across platoon-operations and into the division's air defense network represents the tactical level of integration and is essential to defeating today's forward area threats.  In support of General Milley's priorities, the Army must reestablish this capability across all Army maneuver divisions, not just the four it has currently funded.

The Avenger air defense system entered the Army inventory in 1988 and has not seen a major upgrade since 2004.  It is a rear-area air defense system, not designed to support a maneuvering force, and it would not survive nor be effective in defending a heavy force on the move.  M-SHORAD is the right solution to solving this operational need.

The Sentinel-A4 sensor upgrades are essential to countering the UAS and cruise missile threat; in building the forward area's integrated air picture; and contributing information to the joint air picture. This sensor plays a key role in fratricide mitigation, while also providing SHORAD units early warning and situational awareness.  Sentinel is also a key sensor in the homeland's air defense architecture and will be M-SHORAD's area sensor.  Additionally, the A4-upgrades will improve Sentinel's contribution to the counter-rocket, artillery, and mortar (C-RAM) mission.

In 2005, after only one year of development and testing, the Army fielded a C-RAM intercept capability to protect our modular forces in OIF basecamps.  It is not an impressive looking weapon system, and its initial test grades were only in the 'C-range of an alphabetical grading scale', but as one Army General Officer commented to one of this paper's authors, "When you don't have any capability, a C is a pretty good grade."

C-RAM deployed to Iraq in the summer of 2005 and demand for its capabilities has ensured near, back-to-back deployments to Iraq or Afghanistan for the two U.S.-based active-duty SHORAD battalions and occasionally requiring augmentation from the National Guard.  C-RAM has been improved over time, and it recently deployed with Patriot and Avenger units to Iraq.  In 2005, it was far from exquisite, but it was good enough, and it is still on-mission, 15 years later.

The advent of the C-RAM mission led to the development of the Indirect Fire Protection Capability program (IFPC).  Unfortunately, the threat is dynamic, and the counter-unmanned aerial systems and cruise missile capability gap took precedence, morphing IFPC into IFPC Increment-2 to close those critical gaps.  IFPC Increment-2 (hereafter referred to as IFPC) was envisioned to be a non-developmental item, leveraging a multi-missile launcher - developed by Army laboratories and produced in Army depots - which employed existing interceptors and missiles to defeat cruise missiles and UASs The Sentinel radar is IFPC's primary sensor, and the Army's Integrated Air and Missile Defense Battle Command System (IBCS) would serve as its command and control center and gateway into the integrated architecture.

IFPC is envisioned to replace Avenger as the rear-area air defense system capable of dealing with the cruise missile and UAS threat, and eventually, the rockets, artillery, and mortar threats.  IFPC has been challenged - in some cases by technology and possibly by operational requirements plated with "un-attain-ium."