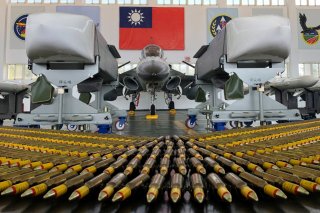 Here's What You Need To Remember: In a daily press briefing, the Chinese Foreign Ministry stated that they “urge the United States to strictly observe the one-China principle and the three China-U.S. joint communiqués, and stop selling weapons to Taiwan or having any military ties with it. We will continue taking necessary measures to safeguard national sovereignty and security interests.”

The narrow expanse of water separating mainland China from Taiwan, known as the Formosa or Taiwan Strait, is only 180 miles, or about 290 kilometers at its widest—and the HIMARS' maximum range is 190 miles or 305 kilometers. The long-range, six-wheeled rocket launcher is noted for its off-road ability as well as the rapidity with which it can deploy, fire a barrage of rockets, and drive off to safety, a tactic known as shoot-and-scoot.

For the last thirty-one years, the United States’ land-based missile range was bounded by INF Treaty restrictions. The United States and the Soviet Union signed the INF Treaty in 1987, which banned either country from fielding land-based cruise or ballistic missiles with a range of 500 to 1,000 kilometers, and 1,000 to 5,500 kilometers. Sea- and air-launched missiles were exempted from treaty restrictions.

Further augmenting Taiwan’s long-range firepower is the SLAM-ER missile, an over-the-horizon standoff precision missile with a 155 mile plus range. The SLAM-ER is intended to strike targets on land and at sea and would very likely be compatible with Taipei’s substantial 200+ F-16 fleet. Given the extremely lop-sided advantage, China enjoys over Taiwan in terms of conventional military ability, any enhancement to Taiwan's stand-off warfighting capability would be sure to be a boon to Taipei—and an irritation to Beijing.

Taiwan already possesses a number of missiles that can strike targets deep inside China, but this most recent tranche of American weaponry would provide Taipei with a more robust and survivable equipment suite aimed at deterring a Chinese invasion by increasing the cost of manpower and material to Beijing.

Though Taiwan has been cleared for these three purchases, they are not yet final. Total costs, as well as the exact number of equipment pieces, could be expected to change. One thing is certain, however—irrespective of the overwhelming military advantage China enjoys over Taiwan, Beijing would prefer that this most recent defense acquisition remain nothing more than on paper.

Caleb Larson is a defense writer for the National Interest. He holds a Master of Public Policy and covers U.S. and Russian security, European defense issues, and German politics and culture. This article first appeared in October 2020.