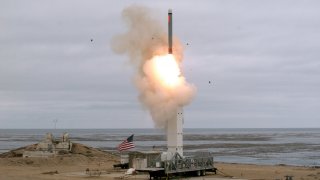 Here's What You Need To Remember: The Ground-Based Strategic Deterrent (GBSD) program, which has under its aegis America's next generation of nuclear missiles, has not yet been laid down - but every aspect of the program has been extensively simulated in computers.

The Air Force feels the pressure of time as it moves to architect a new arsenal of next-generation intercontinental ballistic missiles (ICBMs), given that the existing nuclear-armed Minuteman IIIs are from the 1960s.

Early prototypes have already been built, the Air Force has already decided upon Northrop Grumman as the builder and the new more resilient, more accurate and more lethal nuclear weapons are expected to be operational in a matter of a few years.

Some observers might be of the view that the effort started far later than it should have, given the longstanding need to modernize the U.S. nuclear force. However, the Air Force has moved very quickly to shepherd the Ground Based Strategic Deterrent (GBSD) program through to new stages of development. This speed is due in large measure to merging innovations with digital engineering.

“There is no reason not to attempt the impossible. Over 6 billion GBSD variants were digitally designed prior to selecting the one destined for the silos! This is the ‘eCreate before you Aviate’ paradigm crossing into defense,” Air Force acquisition executive William Roper said in a recent paper on the subject called “There is No Spoon: The New Digital Acquisition Reality.”

Digital engineering has been underway with a large number of programs, including the now-airborne Air Force sixth-generation stealth fighter, yet the GBSD program is widely regarded as being the fastest and most substantial digital engineering success story to procure hundreds of new ICBMs, launch facilities and cabling.

Various computer methods of digital engineering can replicate command and control systems, boosters, warhead configurations and propulsion systems to assess how different designs can move the weapons platform from one stage to another by launching, taking flight and following a certain trajectory to its targets. Interestingly, many of the complex variables fundamental to this process can be closely approximated, analyzed, mirrored and even fully duplicated in respects, a technical process which is already reshaping modern weapons acquisition.

Digital acquisition cannot defeat the laws of economics, so the military must generate more modernization and sustainment savings than are lost with RDT&E and procurement efficiencies.

The Air Force has especially fast-tracked GBSD in part to avoid what some senior Air Force leaders have called a dangerous possibility of a “missile gap,” meaning that a late arrival of GBSD, combined with Minuteman III obsolescence, could put the United States at risk of nuclear attack.

It is in part with this in mind that the Air Force continues to upgrade and test fire its current arsenal of Minuteman III ICBMs, to sustain deterrence by ensuring the world is aware that America is, and will, remain a capable nuclear power.

Kris Osborn is the Defense Editor for the National Interest. Osborn previously served at the Pentagon as a Highly Qualified Expert with the Office of the Assistant Secretary of the Army—Acquisition, Logistics & Technology. Osborn has also worked as an anchor and on-air military specialist at national TV networks. He has appeared as a guest military expert on Fox News, MSNBC, The Military Channel, and The History Channel. He also has a Masters Degree in Comparative Literature from Columbia University. This article first appeared last month.