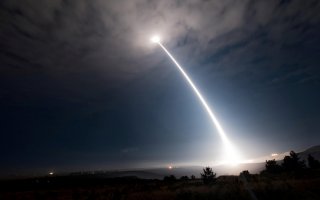 Here's What You Need To Remember: The GBSD missile with last into the 2080s and will feature several important upgrades.

The Pentagon is taking new steps to prepare a new arsenal of U.S.-based intercontinental ballistic missiles (ICBMs) to become operational by the end of this decade, a long-awaited development intended to modernize the nuclear force well into the 2080s and beyond.

The new Ground Based Strategic Deterrent (GBSD) missile program, long considered urgent by Pentagon weapons developers given the age and obsolescence of the existing Minuteman III ICBMs, recently completed its first major design review, a crucial step to its planned deployment in 2029. The review, according to a Northrop Grumman statement, included an analysis of the new weapon’s technical baseline, configuration elements, program data and user requirements.

The Air Force awarded Northrop the GBSD deal last year, a fast-tracked initiative now moving into a new phase of development to include full systems designs, nuclear certification and a series of tests and evaluations.

The weapons, which will disperse in missile silos spread across a vast, three-state expanse of land in Wyoming, South Dakota, and Montana, will incrementally replace hundreds of 1960s-era Minuteman IIIs. The Minuteman IIIs, interestingly, have been upgraded repeatedly in recent years and are still considered viable and operational. For instance, the Air Force has recently test fired several technically improved Minuteman IIIs in what could be interpreted to demonstrate continued U.S. nuclear deterrence readiness in light of rapid Russian and Chinese nuclear weapons modernization.

It goes without saying that many technical details of relevance to the new GBSD are not and will not likely be available due to security reasons. Yet, generally speaking, senior Air Force weapons developers have said it incorporates new generations of reliability, flight stability and targeting technology.

Increased flight reliability would certainly represent a welcome development given the expected missile defense improvements likely to be made by major rivals such as Russia and China. While there has been some foreign press about Chinese missile defense interceptors, the sophistication of Russian and Chinese ICBMs may be largely unknown. However, U.S. ICBM interceptors and countermeasures are fast evolving through Pentagon programs such as the Next Generation Interceptor and various kill vehicle innovations, so there is likely some measure of concern regarding the relative sophistication of Russian and Chinese missile defenses. Russian and Chinese hypersonic weapons testing, for example, has been very well established, something that can clearly present new implications for missile defense.

What all of this points to is simply that not only will the new GBSD need to be built for longevity, sustainment and a decades-long service life, but it will likely be built with groundbreaking levels of flight stability and performance technologies to increase the likelihood that an ICBM can successful fly through or counter enemy countermeasure to ensure it continues through to its intended target. Perhaps this will involve new sensors or jamming technologies with which to confuse or thwart the guidance systems of enemy ICBMs interceptors.