Minuteman III: The U.S. Military Just Tested an ICBM That Can Travel 8,000 Miles 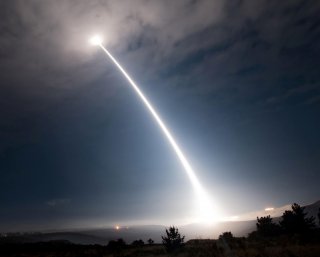 The United States just fired a Minuteman III intercontinental ballistic missile (ICMB). The Minuteman III has the farthest range of any missile in the U.S. arsenal and can reliably hit targets as far away as 13,000 kilometers, or about 8,000 miles. The missiles are distributed throughout three launch locations in Wyoming, North Dakota, and Montana. This particular Minuteman III however, was somewhat different from the rest of the United States’ nuclear arsenal.

In this test, a Minuteman III missile was chosen at random from the missiles stored at F.E. Warren Air Force Base in Wyoming. Rather than being launched by a ground controller however, the missile was fired off by a Boeing E-6 Mercury via the plane’s Airborne Launch and Control System.

The ALCS is the airborne component of the United States’ Minuteman III missile launch. An on-board missile combat crew, highly trained missileers, provide a survivable launch capability and ensure that the United States’ Minutemen can be launched, even if controllers on the ground are destroyed or otherwise unable to carry out a launch. A short video of the test launch can be seen here and is worth the watch.

The official Air Force press release announcing the test launch clearly states that test launches are planned well in advance, sometimes half a decade before the actual launch button is pressed. “The launch calendars are built three to five years in advance, and planning for each individual launch begins six months to a year prior to launch,” and are “not related to any events in the world at this time.”

Still, testing a Minuteman III with three warheads rather than just one indicates a powerful deterrent message. An Air Force Colonel as much as confirmed this, saying, “most importantly, this visible message of national security serves to assure our allies and dissuade potential aggressors.”

As a part of the New Strategic Arms Reduction Treaty, or New START, limits are placed on the number of missiles that both the United States and Russia have deployed, though limits on the number of total warheads is not defined.

Still, about 400 of the United States’ Minuteman III missiles are armed with just a single nuclear warhead, rather than the three Multiple Independent Entry Vehicles (MIRVs) that they are capable of carrying. This decision is not required by New START, but is a decision that the United States made independently of the treaty.

This test showcases the United States’ ability to quickly refit Minuteman IIIs with three MIRVs—and that they’re just as accurate, and triply powerful. Still, the Minuteman III will eventually be replaced with something more reliable and less maintenance-intensive—the Ground Based Strategic Deterrent. Until then, however, America’s Minuteman III is alive and well.