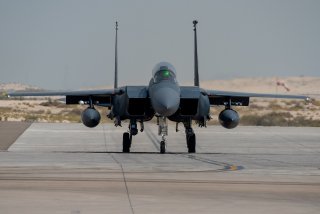 Here's What You Need to Know: The F-15s fired the Joint Air-to-Surface Standoff Missile (JASSM), a weapon that first emerged years ago and has been upgraded several times.

In what could be seen as a visible message of deterrence to Russia, the U.S. Air Force, U.S. Navy, and U.K. Royal Air Force fired air-to-ground missiles from F-15s over the Baltic Sea as part of a series of international, multi-domain war preparation exercises.

The air attack assets, which included F-15Cs and F-15Es connected with a web of nodes to include an Air Force Air Operations Center, Deployable Ground System, C-17 cargo plane and KC-135 tanker, all of which were integrated with U.S. Army ground sensors and a U.S. Navy P-8 sub-hunting surveillance planes.

The mission scenario, which was part of a Combined Joint All Domain Command and Control war training exercise, was designed to prepare a wide-spanning, disaggregated yet interconnected group of networked combat nodes spanning from air to sea to land.

“As we look at our digital infrastructure, we recognize it is important to our ability to push data across the different platforms we have operating… not only airborne platforms but platforms that provide us the fusion. We need to be able to manage targets and track where we are in terms of finding targets and engaging,” Gen. Jeffrey Harrigian, Commander, U.S. Forces Europe, Africa, told reporters during the recent 2021 Air Force Association Symposium.

The F-15s fired the Joint Air-to-Surface Standoff Missile (JASSM), a weapon that first emerged years ago and has been upgraded several times. Some of the upgrades to the air-to-ground weapon include new targeting data linkages, graphical user interface with strike data, and various computer systems pertaining to the weapons launch and attack flight. The JASSM Extended Range also arms the B1 bomber and F/A-18s. Software upgrades to missiles, launchers, delivery systems, and even projectiles such as ground-fired artillery can improve guidance, extend the range in some cases, refine targeting or help build in a programmable fuse. Pre-programmable fuses can offer attackers new options such as proximity detonation, delayed explosives or certain kinds of variable yield effects.

Air to ground attacks, such as those enabled by JASSM, make sense for a multi-domain oriented exercise as targeting specifics, guidance technologies and sensor data can arrive from ground command and control or the air or, in some cases, from the weapon itself. As a precision-guided standoff air-launched weapon, JASSM efficacy could be greatly improved or impacted by cross-domain targeting. Perhaps a mobile ground unit encounters enemy targets ideally suited for JASSM attack? Or an aerial drone finds high-value ground targets at long distances and then instantly networks targeting specifics to an F-15 pilot. Harrigian seemed to emphasize this kind of connectivity in his discussion of JADC2, as he cited the importance of communicating from the operational level to the wing level to ensure the leading edge of combat is quickly and sufficiently informed with the requisite situational awareness to conduct attack missions.

An Air Force report on the demonstration said the exercise converged assets from all domains and across NATO allies into the Baltic Sea. The concept, according to the report, is to “generate firepower inside an area that an adversary believes to be protected through anti-access, area-denial technology, while also supporting the resiliency and defense of a key power projection base.”