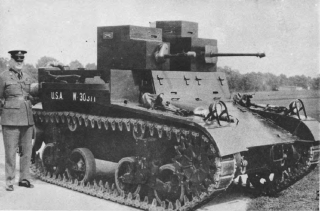 Here's What You Need to Remember: The M2 quickly became obsolete: though adequate for early-war lightly armored Japanese tanks, the 37mm gun was ineffectual against the war’s later, up-armored vehicles. Though the M2 eventually left service, the tank’s successor, the M3 also fared poorly as it retained a 37mm main gun.

This was one of the United States’ smallest tanks of World War Two—and quickly became obsolete.

In the years after the First World War, the United States jumped headlong into tank research and development, eager to capitalize on the advancements in mechanized warfare. Gleaning information from several British armored vehicles, the United States built the M2 light tank.

The American M2 was initially envisioned as a high-speed infantry support vehicle, intended to quickly bring a large amount of firepower to bear on enemy positions. By keeping enemy troops pinned down with the help of a high volume of fire, dismounted infantry could outmaneuver and destroy enemy positions. To that end, M2s were initially armed with only multiple general-purpose machine guns.

However, the lack of a larger caliber anti-tank weapon quickly became apparent as a significant M2 design shortcoming. In order to remedy the tank’s poor firepower, the M2 was equipped with a 37mm anti-tank gun, capable of firing both high-explosive rounds as well as canister shot.

Though the United States fielded several variants of the M2, the most effective of these sported the single 37mm main gun as well as several .30 caliber medium machine guns: two on sponson-type mounts on either side of the tank’s hull in a static, forward-facing position, one located in the front hull glacis on a ball mount, and a fourth on the turret top.

Despite the M2’s relatively small size, the tank had a full, four-member crew size which consisted of a gunner, driver and co-driver, as well as a commander who pulled double duty as a loader.

Likely the M2’s only combat engagement occurred with the United States Marine Corps during the 1942-43 Battle of Guadalcanal. During that conflict, the M2s served primarily in an infantry support role, as their medium machine guns and small 37mm main gun were rather insufficient for countering Japanese armored vehicles. The M2s did enjoy some measure of success however when employed against static Japanese defensive positions, or against massed banzai charges.

The M2 quickly became obsolete: though adequate for early-war lightly armored Japanese tanks, the 37mm gun was ineffectual against the war’s later, up-armored vehicles. Though the M2 eventually left service, the tank’s successor, the M3 also fared poorly as it retained a 37mm main gun.

Eventually, both the M2 and M3 would be supplanted by the M4 Sherman which you can read more about in this previous National Interest piece. The M4 was larger, more heavily armed and armored and superiors in virtually every respect to both the M2 and M3. Though certainly not the most impressive of the United States’ World War Two-era armored vehicles, the M2 nonetheless hold the special distinction as one of the smallest American tanks of the war.