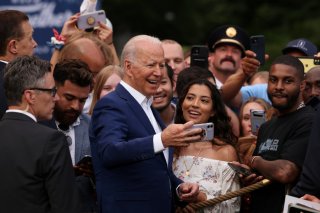 There is little doubt that proposals for a fourth round of stimulus checks are popular among the American electorate. Repeated polls have shown that a majority favor them; one survey noted that nine in ten Americans believed that they had been helpful during the pandemic, and another indicated that 65 percent of Americans would support a fourth round of payments. A Change.org petition calling for monthly stimulus payments of $2,000 to every American adult has so far received 2.4 million signatures, one of the page’s highest.

Despite this, stimulus checks have received scant attention in Washington, where a larger fight is brewing over President Joe Biden’s infrastructure proposals. Following the successful negotiation of a bipartisan infrastructure deal by the “G21,” and a brief gaffe by Biden in which he implied it would be vetoed, the bill is back on track. However, while five Senate Republicans approved of the bipartisan bill, ten are needed to eliminate the threat of a filibuster.

Biden’s problem is complicated by the fact that some Democrats are revolting, threatening to block the legislation unless it comes side-by-side with a second, more expansive bill. These complaints have been associated with the Democrats’ progressive wing, including Sen. Bernie Sanders (I-Vt.) and Representative Alexandria Ocasio-Cortez (D-N.Y.), but they extend to Speaker of the House Nancy Pelosi (D-Calif.), who has stated publicly that the bipartisan bill will not receive a vote unless it is accompanied by a larger “reconciliation” bill. (In the Senate, “reconciliation” is a procedural mechanism introducing a bill that cannot be filibustered, meaning that it would only require fifty senators and the vice president to pass, rather than sixty.) Senate Majority Leader Chuck Schumer (D-N.Y.) has indicated that he would put both bills on the floor of the Senate at the same time but has not given a timeline for this.

But Schumer will have to hurry. Congress is set to recess on Thursday in advance of the Fourth of July. While they return to session the following week, another long recess is scheduled to be taken in August, although Democrats have made efforts to keep Congress in session during part of this time. However, it seems inescapable that three weeks is barely enough time, if that, to codify the bipartisan agreement bill, round of support among moderate Republicans, and corral unruly Democrats.

Because of this, Biden and Schumer have their work cut out for them—and the question of a fourth stimulus check, popular or otherwise, has largely been left out of the picture.