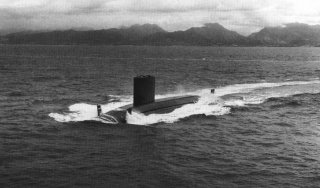 Here's What You Need to Remember: During her thirty-one years in service with the U.S. Navy, USS Blueback participated in Pacific Fleet operations, which included a transiting of the Panama Canal. In September 1961, she also set a record by traveling 5,340 miles from Yokosuka, Japan to San Diego entirely submerged.

In 1996, actor Kelsey Grammer starred in the largely forgettable military comedy Down Periscope, in which a disgraced U.S. Navy officer is given command of an obsolete diesel submarine that was recommissioned to participate in a special naval war game. The movie's screenplay should have been “deep sixed” before the film was actually made, but one takeaway from it is that the U.S. Navy by the 1990s was a fully nuclear-powered fighting force.

Yet, it had been only a few years earlier that the Navy retired and decommissioned the USS Blueback (SS-581). Laid down by Ingalls Shipbuilding Corporation of Pascagoula, Mississippi in April 1957 and launched in May 1959, she was the last non-nuclear submarine to enter service in the U.S. Navy. Serving until October 1990, she was also the final conventionally powered combat-capable submarine to be decommissioned.

The U.S. Navy had only become a fully nuclear submarine fleet some six years before Down Periscope was made, and moreover, the fleet still maintained the research submarine USS Dolphin, which wasn't retired until 2007. Perhaps some screenwriters should have done their homework!

In addition to being the last combat-capable diesel-electric attack submarine commissioned into the U.S. Navy, the USS Blueback was also notable for being just one of three Barbel-class boats to be constructed, and the only of the three to be maintained as a museum ship.

The class was notable in that it actually incorporated numerous, even radical engineering improvements over the previous diesel-electric subs, including the first to be built with the “teardrop-shaped” hull that had been tested on the USS Albacore (AGSS-569), as well as the first to feature a single propeller. The hull design was critical in that it increased underwater speed dramatically while it also enabled the submarine to be far more maneuverable.

Additionally, the Barbel-class utilized a combined control room, attack center and conning tower in the same space in the hull.

During her thirty-one years in service with the U.S. Navy, USS Blueback participated in Pacific Fleet operations, which included a transiting of the Panama Canal. In September 1961, she also set a record by traveling 5,340 miles from Yokosuka, Japan to San Diego entirely submerged.

The submarine also earned two battle stars for her service in the Vietnam War.

Shortly before her decommissioning in 1990, USS Blueback was provided by the U.S. Navy for use in the film The Hunt for Red October, based on the Tom Clancy novel of the same name. Standing in for a Soviet submarine, a film crew was reported to have been allowed to film in the torpedo room, while some of her crew were said to have been paid to wear Soviet Navy uniforms. The submarine had previously appeared in the 1970s TV series Hawaii Five-O.

After her decommissioning, the USS Blueback was struck from the Naval Vessel Register. In February 1994, the boat was acquired by the Oregon Museum of Science and Industry (OMSI), which towed her back to Portland. She serves as a maritime memorial and is an interactive part of the museum. Visitors can walk through the 219-foot submarine to get a glimpse of how the crew of eighty-five sailors and officers lived on the boat. There are two tours for guests—a basic forty-five-minute guided tour and a two-hour long tour that is guided by a submarine veteran, who provides insight on the technical workings of the submarine.

The vessel was added to the National Register of Historic Places in September 2008.