The AR500 Auto Max Is for Far More Than Target Practice 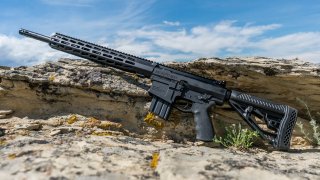 Here's What You Need To Remember: Big Horn Armory simply “super-sized” the platform by chambering it for the rimless version of the Smith & Wesson .500 caliber pistol round, the .500 Auto Max. This makes the round suitable for taking down big game or even taking out hard targets like engine blocks.

Since Colt's Manufacturing released the first batch of 300 Colt ArmaLite AR-15 rifles in December 1959 there have been literally dozens—perhaps even hundreds—of unique takes on the platform. In the past six decades, the venerable AR platform has been produced in a variety of calibers and under a plethora of unique monikers. While some were based on the original designs by Eugene Stoner or Jim Sullivan; and included the AR-10, AR-16, and AR-18 among others— the term “AR” has been used for a variety of firearms that built on the original modern sporting concept.

Included among these is the AR500, an AR that is set apart from the rest of the pack as it is chambered for the .500 Auto Max caliber round. Introduced by Big Horn Armory to match the company's Model 89 Lever Action in 500 Smith & Wesson Magnum, the AR500 is meant to be big and mean, yet still maintains the capabilities and functionality that have made the Stoner/Sullivan AR platform so popular with shooters today. It features an unparallel amount of power into a rapid-firing, versatile rifle.

In recent years, AR-15s have often been erroneously described as “high-powered rifles” by the uninformed in the media, or perhaps even dishonestly by gun control advocates—the truth is that the original AR-15 platform was chambered to fire the 5.56mm cartridge. That intermediate cartridge is actually significantly less powerful than many hunting rifles, and while, yes, it is more than capable of incapacitating man-sized targets, the round has been banned in many states for hunting purposes, especially for “big game.” The reason is that it lacks the power to take down deer-sized or larger game.

This is where the AR500 could certainly fill the void. It is actually built off the AR-10 platform—which was initially rejected by the U.S. military in favor of the M-14. However, in recent years the AR-10 has made a comeback of sorts, in part because of its versatility and ability to use the heavier hitting 7.62mm caliber cartridge; while AR-10s have also been produced in .5-millimeter Creedmoor, 7-millimeter-08 Remington, and .338 Federal.

Big Horn Armory simply “super-sized” the platform by chambering it for the rimless version of the Smith & Wesson .500 caliber pistol round, the .500 Auto Max. This has been described as a versatile cartridge, which includes loads ranging from just 350grns upwards to 600grns, while it can be used with a variety of bullets including hardcast, jacket hollow points, and monolithic solids among others. This makes the round suitable for taking down big game or even taking out hard targets like engine blocks.

The hard-hitting power does require a few tradeoffs, however. While it still weighs in at less than 10 pounds (empty), the gun doesn't come cheap. At nearly $2,000 it is on the higher end of the spectrum on ARs today. The bigger downside is that its standard magazine holds just five rounds—while a nine-round magazine is available. That's considerably less than the 30 rounds of an AR-15, but given that this one kicks a bit harder, most shooters may not want to fire a full magazine of 30 anyway.

The AR500 may not find a home in every AR owner’s “arsenal,” but for those who want to the popular platform for more than shooting targets, this could be the gun to take when heeding the call of the wild.