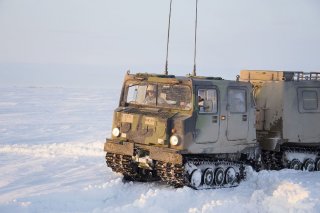 Here's What You Need to Remember: Although exact numbers are difficult to ascertain, it is estimated that a few dozen of these Small Unit Support Vehicles remain in U.S. service. Having been introduced in the early 1980s, they have since grown long in the tooth. Here’s what could replace them.

The Arctic is one of the world’s most inhospitable places. Freezing, sub-zero temperatures, long nights in winter, and long days in summer, operating there requires a unique set of skills and equipment—some of which are due for a replacement.

One of the United States’ more niche vehicles is the Small Unit Support Vehicle. This all-terrain vehicle is actually two pods joined together by an articulated hitch, which, combined with four-wheel (or track) drive, gives the SUSV excellent mobility. The SUSV’s wide tracks afford both pods low ground pressure, allowing the little vehicle to glide easily over soft snows rather than becoming bogged down. They’re also amphibious to a certain degree, and able to drive through marshes and other soupy, watery terrain.

The SUSV is operated by the Army, Marine Corps, and National Guard and, though they can be armed with a remotely operated roof-mounted heavy machine gun, are often unarmed, serving in a troop transport role. They can carry approximately seventeen or so soldiers or Marines, six in the forward compartment, and an additional eleven in the rear pod.

Although exact numbers are difficult to ascertain, it is estimated that a few dozen of these Small Unit Support Vehicles remain in U.S. service. Having been introduced in the early 1980s, they have since grown long in the tooth. Here’s what could replace them.

One defense industry expert outlines what the U.S. Army is looking for specifically, including, “[a] 10-person general-purpose, an ambulance, C2, and a cargo vehicle. Mobility is to allow movement in 'a wide range of otherwise impassable terrain, to include frozen ice, and extremely cold weather conditions,’” for a total of eight-five vehicles.

One of the defense companies contending to replace the Cold War-era vehicle is BAE Systems. On offer is their Beowulf platform, a visually similar two pod, tracked vehicle. The vehicles on offer from BAE “represent the most advanced vehicles in the world when it comes to operating in any terrain, whether it’s snow, ice, rock, sand, mud, swamp, or steep mountainous climbs,” company promotional material explains.

In addition, “its amphibious capability allows it to swim in flooded areas or in coastal water environments,” allowing the tracked transport to operate in a wide range of environments, not limited to just frozen Arctic regions.

The visually similar Singaporean Bronco 3 all-terrain vehicle has also been suggested as a SUSV replacement and may offer superior protection and mobility when compared to its BAE Systems competitor. One Bronco 3 variant is currently in service with the British Army where it is known as the Warthog.

Whichever platform ends up being selected, one thing is certain—great power competition in the frigid, far north—be it on land or at sea—is here to stay.