Are Iran's Russian-Built Kilo-Class Submarines More Than the U.S. Navy Can Handle? 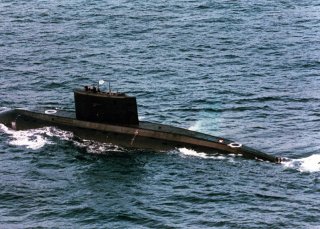 Here's What You Need to Remember: Despite the difficulties in anti-submarine operations in both the Persian Gulf and the Strait of Hormuz, the Iranian submarine movement would be severely limited by the shallow depth, especially in the Gulf. Outside the Gulf, though, is another matter.

Iran maintains a large fleet of submarines as the strategic port of Bandar Abbas, the majority of which are domestically manufactured. Most of Iran’s underwater fleet are midget submarines, designed for infiltration and sabotage, or small displacement submarines that may have limited endurance and dive depth. However, the Soviet Kilo-class is their best against the U.S. Navy if a conflict were to ever occur.

After a failed attempt to partner with North Korea on submarine manufacturing, Iran looked elsewhere for necessary submarine know-how—Russia. Iran acquired three Soviet-built Kilo-class submarines in the early to mid-1990s that are among their most capable.

A U.S. Navy report explained how Iran as a submarine power could have drastically altered the environment in the Persian Gulf region.

“In past Gulf conflicts, submarine threats to Western naval forces were nonexistent. This environment changed dramatically when Iran took delivery of three diesel-powered Kilo-class boats from Russia for $600 million each (because of delivery delays and additional crew proficiency training, Iran eventually paid $750 million for the third boat). The first boat arrived in Iran in November 1992, and the second Kilo pulled into Bandar Abbas in July 1993. Because of extensive U.S. pressure to cancel the deal, Russia held up delivery of Iran's third Kilo until December 1996.”

Although the Kilo-class is a fairly modern submarine design, it had teething problems while in service with the Iranian navy. As the Kilo-class is diesel-electric, it has several large batteries that store electricity generated by onboard diesel engines.

These batteries were optimized for the cold, blue-water ocean in which the Soviet Navy would typically have operated in, and not the comparably hot coastal waters of the Persian Gulf. With assistance from India, Iran was able to manufacture replacement batteries that were optimized for warm-water operations.

Two factors would likely hamper (or perhaps make impossible) American anti-submarine operations in the Persian Gulf and the Strait of Hormuz. Because of the Gulf’s relatively shallowness and unpredictable heat patterns, anti-submarine sonar would be “nearly useless,” due to difficulties in sonar operation when not at depth.

Compounding the problem in the Persian Gulf are the complicated conditions in the Strait of Hormuz. A meager supply of fresh water from the Gulf into the Straight, coupled with high temperatures that cause a great deal of evaporation results in a very saline environment. This high-salt environment creates “complex underwater currents…[that] makes antisubmarine acoustic detection of the submerged Kilos almost impossible.”

The Kilo-class is also very difficult to track. Part of the difficulty is due to anechoic tiles that parts of the Kilo-class hulls were equipped with. Anechoic tiles are essentially large rubberized tiles embedded with air bubbles of varying sizes that deflect or absorb sonar. Some types of anechoic tiles also have surface pockmarks that serve the same purpose.

Despite the difficulties in anti-submarine operations in both the Persian Gulf and the Strait of Hormuz, the Iranian submarine movement would be severely limited by the shallow depth, especially in the Gulf. A scanty “one-third of the Gulf’s narrow water area is deep enough to meet the Kilo's minimum submerged depth requirement of 100 feet.” This would likely limit the usefulness of Iran’s Kilo-class inside the Gulf, though they would pose a very serious threat outside the Gulf.