The Army’s New Robotic Tank Can Do It All 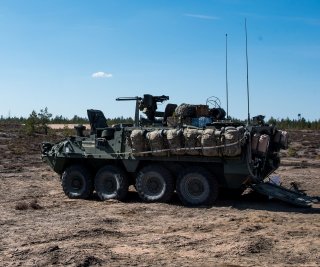 Here's What You Need to Remember: The Army concept is clear and can be found simply with three words: Manned-Unmanned Teaming. Forward operating robotic vehicles, when properly networked, can test enemy defenses, locate high-value targets and maneuver into high-risk hostile territory.

What if a ten-ton tracked robotic vehicle, traversed rugged, high-risk terrain, adjusted to emerging enemy threats, blocked enemy advances and identified hostile targets? What if then, it sent back combat-sensitive reconnaissance vehicles to follow on manned armored units—all without needing human intervention?

While U.S. Army doctrine still requires that a human be “in-the-loop” regarding the use of lethal force, this kind of technology is essentially here.

Not only that, but integrated, complex and varied missions of this kind represent the tactical and operational scope intended for the Army’s Robotic Combat Vehicle-Medium, an emerging robotic platform now being fast-tracked by the Army.

General Dynamics Land Systems, one of the vendors now competing to develop this platform with the Army, has unveiled its Tracked Robot ten-ton vehicle. It’s called TRX, an AI-enabled tracked platform built with lightweight materials and advanced technologies to optimize payload to weight ratio, weapons integration, sensor performance, attack missions and, perhaps most of all, manned-unmanned teaming.

GDLS developers said the TRX can be remotely operated, semi-autonomous or fully autonomous depending upon mission requirements. It can travel with a Stryker-like turret armed with a 30mm cannon and integrate a new generation of AI-capable sensors.

“We made it architecturally capable of incorporating a variety of mission packages and data processing capabilities to allow input from sensors to be managed and redistributed as necessary,” a senior General Dynamics Land Systems weapons developer told The National Interest.

The Army concept is clear and can be found simply with three words: Manned-Unmanned Teaming. Forward operating robotic vehicles, when properly networked, can test enemy defenses, locate high-value targets and maneuver into high-risk hostile territory. In addition, they can bring food, supplies and ammunition to infantry in the line of enemy fire all while minimizing risk to soldiers. Should the TRX’s integrated sensor suite operate with the most cutting edge technologies, it will be able to gather, organize, analyze and disseminate crucial warzone data from a wide range of otherwise disparate air, ground or even sea-based combat “nodes” autonomously.

The anticipated value of the RCV-M resides heavily in this concept of networking and high-speed information processing. Given that future warfare is expected to increasingly be multi-domain, a suite of integrated sensors enabled by advanced computer algorithms, can bring indispensable value to combat by virtue of being able to aggregate target info, find points of greatest relevance, perform near real-time analytics and transmit organized information to human decision makers.