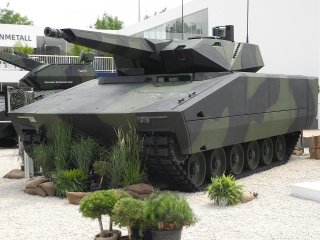 Here's What You Need to Know: Developers of the Lynx said it would be feasible to arm the vehicle with some measure of air-defense weaponry such as Stinger missiles.

The Army’s new Bradley Fighting Vehicle replacement, known as the Optionally Manned Fighting Vehicle (OMFV) infantry carrier, will likely be armed with an entirely new sphere of weapons, including counter-drone air missiles, anti-tank weapons, and attack drones. The exact configuration will depend upon which defense contractor is selected to build the new carrier. The Army has awarded five developmental deals for the vehicle to Oshkosh Defense, Point Blank Enterprises, BAE Systems, General Dynamics Land Systems, and American Rheinmetall.

One of the offerers, American Rheinmetall Vehicles, is a team consisting of defense contractors Rheinmetall, Raytheon, Textron, Allison Transmission and L3. Their offering is called the Lynx vehicle, and according to developers, it could be armed with Stinger Anti-Aircraft Missiles and Attack drones.

The Army’s director of the Next Generation Combat Vehicle Cross-Functional Team, Maj. Gen. Ross Coffman, told the National Interest that the Army is allowing industry a lot of flexibility with which to approach its vehicle configuration. Coffman says the vehicle must be able to out-range the enemy and cross 80 percent of the bridges in Europe. This leaves the door open to arming the vehicle with a 30- millimeter, 40-millimeter, or 50-millimeter cannon.

Developers of the Lynx have told the National Interest that it would be technically feasible to arm the vehicle with some measure of air-defense weaponry such as Stinger missiles. There may not at the moment be a specific requirement for any kind of air-defense component for the OMFV, yet it will be armed with counter-drone weaponry and sensors and is being designed to accommodate a wide range of weapons, including new innovations as they emerge. In essence, there are few limits when it comes to what an open architecture system might be able to accomplish by way of increasing cross-domain connectivity or an expanded weapons envelope.

The Lynx may be armed with Raytheon’s Coyote drone, which might introduce a new sphere of tactical options for the new OMFV because it introduces another counter-air and counter-drone technical possibility for combatant commanders. Raytheon developers are continuing to refine and upgrade the Coyote drone—even as it is being integrated with the Lynx is a system. Soon, the Coyote drone will be able to surveil territory and operate as a munition.

While preparing to upgrade the counter-drone system with the Coyote Block 2, Raytheon and the Army are emphasizing new innovations, such as the application of artificial intelligence and machine learning. Raytheon developers have told the National Interest that the firm is looking at some of the next steps with “data fusion,” involving the use of artificial intelligence to analyze fast arriving data from otherwise disparate sensor systems to optimize the delivery of crucial combat data. This progress, already well underway by Army and Raytheon developers, is well articulated in an essay called Deep Learning on Multi Sensor Data for Counter UAV Applications—A Systematic Review, published by the U.S. National Library of Medicine, National Institutes of Health.

Raytheon weapons developers described Block 2 as a “larger, optimized warhead with improved tracking detection, engine performance and warhead effectiveness.” Equipped with an advanced seeker and small warhead, Coyote drones can launch from a range of locations, including fixed locations and armored vehicles on the move, including vehicles such as the Lynx.

By comparing approaching threat information against a vast database of compiled information, artificial-intelligence-enabled algorithms can perform the real-time analytics necessary to determine and present a course of action options to a human decisionmaker in a nearly instantaneous fashion. For example, artificial intelligence and machine-learning programs can analyze arriving threats against previous occasions wherein drones were used to attack in a variety of ways, factoring a wide array of variables such as previous speeds of approach, swarm techniques, weapons used, and navigational factors such as weather obscurants or terrain details.