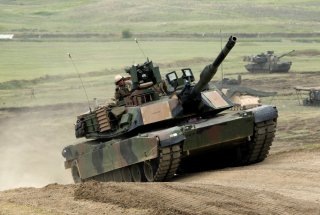 Here's What You Need to Remember: The ATLAS system is no panacea. Like infantry soldiers who rely GPS for navigation, but can also use an old school map and compass, tank crews will also need to be proficient in traditional target acquisition and firing in case of electronic breakdown.

Since their combat debut during the First World War, tanks have steadily, but incrementally improved. Armor protection has gotten progressively more resistant thanks in part to advanced explosive-active armor (ERA) plating designed to defeat modern warheads, and active protection systems can detect and shoot down projectiles before they can hit a tank. Main guns have gotten larger and more powerful, as has engine output. In addition, some tanks have even dropped one crew member, the loader, in favor of an automatic loading mechanism.

And while today’s modern main battle tank could likely shred older Cold War-era tanks, there is one tank element that has remained virtually unchanged for the last several decades: the process of target acquisition, aiming, and firing. But one U.S. Army initiative, called Advanced Targeting and Lethality Aided System, or ATLAS, wants to change that.

By incorporating a variety of sensors that collect battlefield data, new displays, and a computed-aided list of targets and ammunition recommendations, ATLAS hopes to drastically reduce the amount of time from target acquisition to pulling the trigger. Here’s how it works.

A tank outfitted with the ATLAS system uses a variety of sensors to find potential targets on a battlefield. Once found, an onboard computer will display those targets to a tank gunner and recommend appropriate ammunition for the target—high-explosive for buildings, armor-piercing sabot for tanks and other armored targets, and anti-personnel or airburst rounds for groups of enemy soldiers. With a mere tap of the finger, a target can be selected and destroyed.

Though the computer will provide recommendations, the tanker is always in the loop and makes the final decision on whether or not to fire. The amount of control a tanker would have is actually more expansive that a simple yes/no decision: ammunition types and even targets can be changed by the individual soldier.

Though the Army program is still in development, it has the potential to massively decrease the amount of time a tank crew needs to find and destroy targets without extensive hardware upgrades.

The ATLAS system is no panacea. Like infantry soldiers who rely GPS for navigation, but can also use an old school map and compass, tank crews will also need to be proficient in traditional target acquisition and firing in case of electronic breakdown. Importantly, the ATLAS system would not be able to make the decision to shoot, this would remain with the tank’s gunner. This isn’t an AI revolution, but rather a firepower evolution.

Caleb Larson is a defense writer with the National Interest. He holds a Master of Public Policy and covers U.S. and Russian security, European defense issues, and German politics and culture. This article first appeared last year and is being republished due to reader interest.