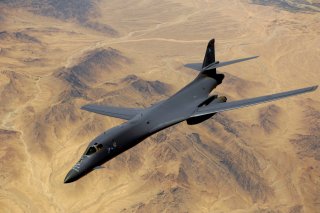 Here's What You Need to Remember: The successful demonstrations highlight the possible weapons configuration that may be implemented on the B-1B. It is also worth noting that this is not exactly a new consideration for how the bombers might employ strategic weapons.

In the tests, the Lancer launched an inert Joint Air-to-Surface Standoff Missile (JASSM) from an external pylon underneath the aircraft’s fuselage. The external pylon usually carries the “Sniper” targeting pod. This follows an earlier test, during which a B-1B carried an inert JASSM under an external pylon for the first time. The goal of these tests is to determine how the Cold War era B-1B bombers can be best employed to carry hypersonic weapons externally.

The targeting pod pylon on the B-1B was modified mechanically, which allowed for different connector configurations, while the internal wiring was replaced with harnesses to support its new role, explained N. Keith Maynard, 812th Airborne Instrumentation Test Squadron.

“Although the modification required to reassign one of the internal weapon stations to the external location was well within our capability, it wasn’t part of our normal charter of data acquisition,” said Maynard, who serves as the special instrumentation flight chief, and currently leads a group of more than sixty engineers, technicians, project managers and logisticians.

“Regardless, we jumped on the opportunity to help our customer and immediately assisted with the planning and provisioning and, when approved to do so, executed the modifications to the pylon and aircraft,” he added.

The Air Force said that the flight culminates the B-1B expanded carriage demonstration that began with a modified internal bomb-bay demo in 2019. This was followed by a “box drop” ground tests that was conducted in October 2020 to verify the mechanical modifications to the pylon, and then last month’s captive carry flight, which helped set up the external release mission.

“In this case the Air Force Seek Eagle Office performed modeling of the separation characteristics and determined that the JASSM separation from the B-1B pylon should replicate the normal JASSM control surface deployment timeline that occurs when launched from the Left Pylon station 2 of the B-52H,” said Agustin Martinez, 419th FLTS electronics engineer. “The prior captive carry flight verified that the JASSM received the correct information in order for it to follow the B-52H surface deployment timeline.”

The successful demonstrations highlight the possible weapons configuration that may be implemented on the B-1B. It is also worth noting that this is not exactly a new consideration for how the bombers might employ strategic weapons.

External pylons were originally designed for use on the B-1s but were later scrapped to comply with the Strategic Arms Reduction Treaty (START). However, the Air Force has maintained that the return to use of external hard points would not violate the New START agreement. Planned implementation, if any, of the B-1B’s expanded carriage demonstration would also not alter plans for the seventeen aircraft already requested for retirement.

These recent tests were heralded by Gen. Tim Ray, commander of AFGSC, who stated, “Airmen continue to rise to the challenge, modernizing, adapting and innovating the fleet we have while bridging to the fleet of the future.”