Bad News for NATO: This Russian Battlecruiser Is Coming Back 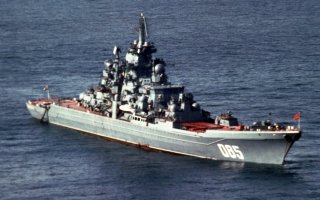 Here's What You Need to Know: Repairs and upgrades are continuing apace.

The Russian Navy Kirov-class nuclear-powered guided missile cruiser Admiral Nakhimov was one of the Soviet Navy’s largest and most powerful warships. However, she has spent most of her career waiting for a substantial upgrade to be completed. The vessel is now set to get a new lease on life that could also keep the aging warship in service for at least another decade or longer—if the ongoing refit is ever actually completed.

Laid down in May 1983 at the Baltic Shipyard and launched in April 1986, the battlecruiser was commissioned into the Soviet Navy on December 30, 1988 as the Kalinin. Renamed in 1992 in honor of Pavel Nakhimov, an admiral of the Imperial Russian Navy who commanded the naval and land forces during the Siege of Sevastopol during the Crimean War, this is the fifth warship to bear his name.

The Project 11442M Admiral Nakhimov guided-missile cruiser has had a far less distinguished career than her namesake however. As noted, the vessel has actually spent more time waiting for a planned refit than in actual service. After the end of the Cold War the battlecruiser was rarely deployed and it entered the Sevmash shipyard to undergo repair and modernization in 1997. Due to financial strains in Russia, no work actually began at the time and since 1999 the ship has been permanently docked in Sevmash while waiting for a refit. It was only in September 2008 that the vessel’s spent nuclear fuel was even unloaded.

Last June, the head of Russia’s United Shipbuilding Corporation Alexei Rakhmanov announced that repairs on the missile-carrying cruiser had reached the 50 percent mark and that completion of repairs is expected by the end of next year.

“We are planning to complete the ship’s repairs in 2022,” said Rakhmanov during the Russian Shipbuilders’ Day celebrations in Russia on June 29, 2020 as reported by Tass.

“I hope that nothing will impede this,” he added. “At least, all major decisions on financing, construction schedules and the work with suppliers are being made within plus or minus several months today, which gives us the ground to believe that we will complete the repairs in 2022 and deliver it to the Navy.”

As part of its repair and upgrade, the modernized warship will be equipped with the Fort-M (SA-N-6 Grumble) and Pantsyr-M air defense missile systems and the powerful Paket-NK and Otvet anti-submarine missiles. It will also be outfitted with the capability to fire high-precision weapons, including the Zircon hypersonic missiles, the Oniks (SS-N-26 Strobile), and the Kalibr-family (SS-N-27 Sizzler) missiles.

Last December, Deputy Defense Minister Alexey Krivoruchko visited the Sevmash shipyard, which is a subsidiary of the United Shipbuilding Corporation, to note the progress that had been made on the Kirov-class cruiser.

“The implementation of the works was checked,” Krivoruchko was quoted by NavalNews. “Under the plan, the [Admiral Nakhimov] ship is expected to be delivered [to the Navy] in late 2022. These terms are not challenged.”

Despite those estimates, it is unlikely the vessel will be back at sea for post-modernizations until late 2022 at the very earliest.