Battlecruisers Are Back: Russia is Resurrecting the Soviet Navy’s Most Powerful Warship 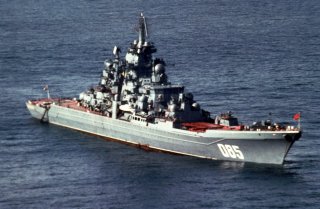 One of the Soviet Navy’s largest and most powerful ships, the Admiral Nakhimov battlecruiser, is getting ready to refit and go out to sea once again. The Nakhimov will undergo a number of modernizations that will in theory allow the massive ship to stay afloat—and to sink other ships.

The Kirov-class of battlecruisers are a small class, only four of the planned five hulls were ever built. But don’t let the class’s small size fool you—the nuclear-powered Kirovs are both the heaviest and largest class of non-aircraft carrier ships in the world. They’re also armed to the teeth.

In the case of the Admiral Nakhimov, the battlecruiser’s main anti-ship weapon are P-700 Granit naval missiles. The Admiral Nakhimov also has on-board anti-air assets onboard in the form of nearly one hundred S-300 missiles for targeting longer-range threats, as well as an assortment of other shorter-range missiles and point defense gun systems.

Russian media report that after the Admiral Nakhimov’s modernization, the powerful Pantsir-M close-in missile system will be installed. The Pantsir-M has the ability to track and intercept missiles that skim over the surface of the ocean and would bring a powerful new defensive capability to the Nakhimov.

Some media outlets have also suggested that the Nakhimov would be armed with Russia’s new Zirkon hypersonic missile. Powered by a two-stage solid-fuel propellant rocket and scramjet engine, the Zircon can fly in excess of Mach 5—a speed that is incredibly hard to defend against, and full of incredibly destructive kinetic energy potential. In addition to the wide array of weaponry on both ship’s decks, both ships can carry a few (possibly up to five) anti-submarine warfare helicopters for underwater defense.

The only other surviving Kirov-class battlecruiser, the Pyotr Velikiy, is currently in service with Russia’s Northern Fleet. That ship, named after Peter the Great, is perhaps most famous for guarding the area where the Kursk nuclear submarine sank in 2001.

The 2022 date of service reentry may be optimistic, however. The large ship was previously supposed to enter service with the Navy in 2018, a date that has been pushed back at least once. Time will tell if the 2022 entry date is accurate, watch this topic closely for future updates.