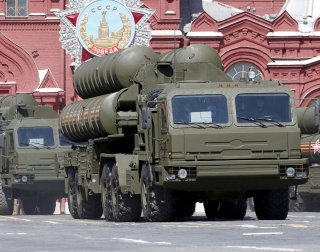 In a series of photographs posted to Twitter, several objects can be seen pointing skyward, and appear to be an anti-aircraft missile launcher/erector and targeting/acquisition radar. Though unconfirmed, some open-source intelligence analysts have speculated that they might be one of Russia’s formidable surface-to-air ballistic missile systems.

Possible candidates are the Soviet-designed S-300 or the more advanced S-400 system. The latter is widely regarded as one of the most advanced anti-aircraft ballistic missile systems in the world.

The S-400 previously made headlines when it was sold to Turkey, despite strong protests from the United States and other NATO members. The Turkish purchase came at a steep cost however, and resulted in Ankara’s expulsion from the United States-led F-35 stealth fighter program due to fears that the S-400 could be used to learn the stealth characteristics of the American-designed stealth plane.

Clues in the Sand

As several analysts have pointed out, an An-124 Ruslan recently landed at the Al Khadim airfare base in Libya’s northeast. This is significant because the An-124 is one of the only heavy strategic airlift planes in Russian service that is capable of transporting either the S-300 or S-400 anti-air systems.

Russia already has an established presence in Libya, where the United States’ AFRICOM documented Russian MiG-29s and Su-27s flying missions. It is unclear if those aircraft were piloted by regular Russian Air Force pilots, or by members of Russian paramilitary groups. Previously, AFRICOM estimated that there were at least 2,000 members of Moscow’s notorious Wagner group deployed in Libya.

The S-300/S-400 deployment is clearly meant to bolster Russian air defense in the area and could be meant to help Field Marshal Khalifa Haftar’s ongoing campaign against the Tripoli-based Government of National Accord. A large number of drones have been flying through Libyan airspace, particularly of Turkish and Chinese manufacture.

Russian air defenses suffered an embarrassing setback earlier this year when a number of Russian-made Pantisr air defense systems were destroyed by Turkish drones. One of the shorter-range air defense systems was even captured. The newly-deployed S-300/S-400 anti-aircraft system could give Haftar and his Libyan National Army forces an edge, and maybe be intended to make sure Turkish drones don’t score a second success.

Regardless of which of the two anti-aircraft systems the photographs show, what is certain is that Russia’s strategic foothold in North Africa is increasing.