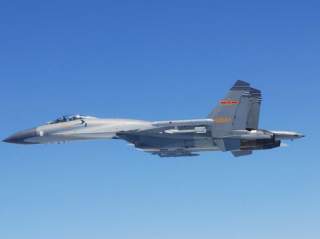 The legendary Sukhoi design bureau has notched a number of notable successes when designing airframes for the Soviet Union and for the Russian Federation. Notable among those is the Cold War-era Su-27 design which just keeps on ticking. Why?

No conversation about the Su-27 is compete without its origin story, its troubled birth in the Soviet Union at the end of the Cold War.

The Su-27 is a Soviet design that adhered to the high-low mix theory of air combat, in which a larger number of smaller, less capable and less expensive aircraft are complimented by a smaller number of more capable (and therefore more expensive) aircraft.

This arrangement serves as a force multiplier, allowing the total number of aircraft to be as effective as a larger number of aircraft. The original Su-27 high-low compliment was the MiG-29, which is aerodynamically similar, albeit a much smaller airframe and considerably less capable.

The Su-27 was designed as a direct competitor to the American F-14 and F-15 families of aircraft. Its capable design reflects this. The Su-27 has a top speed of about Mach 2.35, and has up to ten hardpoints for missiles or bombs.

As long-range air superiority fighter, the Su-27 was intended to keep an eye on the Soviet Union’s borders, protecting against American/NATO bomber incursions, as well as be a multirole fighter.

Given its (at the time) long-range capabilities, the Su-27 was also intended as an escort fighter for Soviet long-range bombers such as the Tu-160 “Blackjack”, Tu-22M “Backfire”, and Tu-95 “Bear” — additional Soviet-era designs that continue to serve in their original bomber roles with Russia today.

It is exceptionally agile: the Su-27, and later more advanced variants of the family are flown by the Russian Knights, an aerobatic demonstrator team similar to the Blue Angels in the United States.

This is due to the Su-27’s super maneuverability: the airframe is capable of Pugachev’s Cobra, a super maneuver in which an aircraft flying at low-to-moderate speed quickly raises its nose, the airframe acting as a large airbrake and rapidly decelerating, then lowering its nose and accelerating away.

There are also a dizzyingly wide array of Su-27 variants developed both for the Soviet Union as well as for the Russian Federation, and for export. The Flanker family of aircraft are also essentially improvements on the initial Su-27 design that incorporate better avionics, extended range, or additional capabilities, like ground attack.

Therein lies the Su-27’s success: a capable and agile airframe that has grown and improved in increments, into the broad Flanker-family of aircraft that are still in service today, both within former Warsaw Pact countries, but also widely distributed within the Middle East, Latin America, and Africa.

Despite the growing proliferation of stealth aircraft, the Su-27 will likely stay in service in conflict scenarios of lower intensity, against adversaries that do not have stealth aircraft or advanced air defenses.

A Chinese SU-27 fighter flies over the East China Sea, in this handout photo taken May 24, 2014 and released by the Defense Ministry of Japan May 25, 2014. Chinese fighter jets flew within a few dozen metres of Japanese military planes over the East China Sea, Japanese officials said on Sunday, prompting the defence minister to accuse Beijing of going "over the top" in its approach to disputed territory. REUTERS/Defense Ministry of Japan/Handout via Reuters​