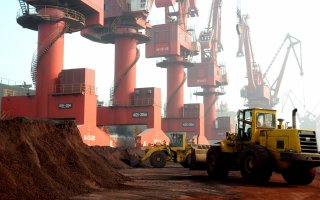 On September 30, the White House issued its second critical mineral executive order since 2017. The Executive Order on Addressing the Threat to the Domestic Supply Chain from Reliance on Critical Minerals from Foreign Adversaries aims to reduce U.S. dependence on foreign sources of select critical minerals, including rare earth elements – for which 80 percent of U.S. imports come from China.

The U.S. government clearly acknowledges the threat posed by China’s near-monopoly of global rare earth production. But the U.S. response to date has ignored the nature of China's rare earths apparatus – its scope, strategic context, global reach, and how Beijing has claimed its current position. As a result, U.S. investment risks sustaining – rather than offsetting – a Beijing-controlled industrial chain.

Beijing’s leverage over critical raw materials extends well beyond its domestic supply or processing capacity. The Chinese Communist Party (CCP) controls the global architecture of critical material production and trade. Rare earths supplies mined outside of China – whether in Myanmar or even the United States – risk being invested in by Chinese entities, processed and separated by Chinese equipment, and moved through Beijing-controlled points of exchange.

Take, for example, LOGINK, a Chinese, State-backed international logistics IT platform that goes entirely overlooked in monitoring China's approach to power projection, let alone its rare earths industrial integration. Governed by China’s Ministry of Transport, LOGINK might be thought of as a “super app” for maritime logistics, where no such unified platform exists. LOGINK aggregates international data on the shipment of goods and infrastructure operations. It provides its users with supply chain coordination, customs reporting, transportation monitoring, and other smart logistics services across rail, air, sea, land, and e-commerce. Beijing is promoting LOGINK as a global technical standard for information logistics.

LOGINK also contributes to the CCP’s stranglehold on the rare earths industrial chain.

Port Klang sits astride the Malacca Strait. It is the 12th largest port by volume in the world. Positioned on Malacca’s eastern coast, Kuantan does not overlook Malacca. It is, however, the access point for a rare earths facility operated by Lynas Corporation, an Australian rare earth mining operation often cited as the only rare earths major outside of China. Lynas rare earths mined in Australia transit through Kuantan to be processed at the Lynas Advanced Materials Plant (LAMP) before reaching their ultimate application. Lynas is a keystone in the U.S. military’s rare earth investment portfolio. The company advertises proximity to the port in Kuantan as a strength of its operation.

The rare earths transiting out of that facility – intended to serve as an alternative to Beijing’s rare earths stranglehold – depend upon a port whose information and logistics systems dock into China’s own. Beijing knows better than the United States what goes in and out of the port upon which the Lynas facility relies, and where it goes. From this position, the Chinese Communist Party will also have ready access to a broad cyber-attack surface that may permit it to penetrate other IT systems operating at the port as well as the industrial internet of things that allow the port to operate. And the risk exists that Beijing could influence the information going to the Kuantan Port and its users, to affect their route, partner, regulatory, and other choices.

The U.S. is absolutely right to be investing in the production and processing of rare earths outside of China. However, those investments risk being ineffective – and even counterproductive – if they exist within an architecture of exchange governed by Beijing, an industrial chain vertically integrated by CCP-backed actors.

U.S. efforts to secure critical mineral supply chains must do more than find non-Chinese sources or encourage domestic production and processing: They must build, monitor, and bolster a trusted rare earths ecosystem, along the entire supply chain; with that supply chain vetted for Beijing’s indirect control and influence. They must do so in conjunction with U.S. allies and partners. And they must do so in a manner updated for Beijing’s strategic subversion of global standards, networks, and platforms of exchange – subversion that allows China’s rare earths “absolute advantage” to extend well beyond its borders, without global recognition or resistance.

This imperative extends well beyond rare earths – because China’s ambitions and potential coercive leverage do. The potential information dominance to be derived from LOGINK extends globally, across industries, to military and civilian applications.  And LOGINK is only one instrument in Beijing’s platform geopolitics toolkit. China is also developing other trade and logistics IT platforms, setting other global standards, building other new infrastructure foundations, and shoring up control throughout other critical industrial chains.

China’s State-owned Global Times counsels that recent U.S. efforts to shore up access to critical minerals are “wishful thinking.” Until U.S. investments get much smarter, they are proving Beijing right. And rare earths are just the beginning.