Beijing Beware: The U.S. Submarine Fleet is Getting an Upgrade 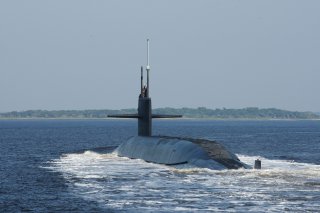 Here's What You Need To Remember: The U.S. submarine fleet has equipment that is rapidly aging - and as China becomes a more potent adversary, there is an increasing push to modernize and upgrade it.

As the size and quality of the People’s Liberation Army Navy increases, so too must the U.S. Navy’s qualitative edge increase. Ship for ship, the PLA Navy is now the world’s largest, and although numbers alone do not necessarily have any bearing on ship quality or capability, a larger Chinese Navy does pose a threat.

In particular, Chinese anti-access/area-denial capabilities, or the ability to hit ships far out at sea, static bases in the Pacific region, or logistic chains, with physical kinetic weapons, or virtually in the cyber domain pose a real threat to the United States interests—and world's interests—in the Pacific region.

But, the United States Navy has a plan, one that also involves area-denial efforts.

Part of the Navy’s plan is to upgrade its Tomahawk cruise missiles. The Cold War-era missiles, first brought into American service in the 1980s, have steadily been upgraded since their introduction. The latest Tomahawk variant, Block V, will actually be three subvariants and one of the most important, the Maritime Strike Tomahawk (MST), is set to have some pretty and powerful capabilities.

The MST will have an unspecified seeker system that will allow it to hit moving targets. The system is said to have a 1,000-mile range, or just over 1,600 kilometers, which pushes the limit of what U.S. Navy ships can hit. The Navy plans to either retire all preceding Tomahawk variants or bring them up to the Block V standard.

But the missile won’t be limited to surface ships—American submarines are also slated to receive the upgraded Tomahawks as well.

U.S. Navy submarines are the most advanced in the world and are the linchpin of American naval deterrence. But they are aging. The Los Angeles-class submarines, the world’s most numerous attack submarine class, is rapidly approaching the end of their useful life cycle. Though they will be replaced by the stealthier, nuclear-powered Virginia-class, overall submarine numbers are set to decline in the coming decades.

And, despite the Navy’s declining submarine numbers, their sister service, the United States Marine Corps is also set to receive the Maritime Strike Tomahawk as well.

Call in the Marines

The Marine Corps is rapidly transforming itself from another Army adept at anti-terrorism operations, toward a land-based extension of the Navy.

And, thanks to the expiration of the Intermediate-Range Nuclear Forces Treaty, which limited the range of the United States’ and Soviet Union’s (later Russia’s) land-based cruise and ballistic missiles, the Marine Corps has been given free rein to do what it wants with the Navy’s missiles.

The Marine Corps would essentially like to push Chinese ships farther out to sea by altering some of the Navy’s sea-based anti-ship missiles so they can be used on land.

Whether it’s Marines on far-flung specks of land firing at Chinese ships, or U.S. Navy submariners lying in wait underneath the wave, change is coming to weapons at hand for both services—China beware.