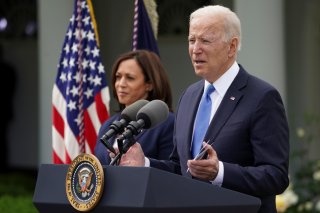 Here's What You Need to Remember: The American Infrastructure Plan and American Families Plan do not include provisions for further stimulus payments, and it is unlikely that such measures will be tacked on by Congress. Instead, they will look to support Americans in other ways not involving direct payments.

The distribution of stimulus payments will likely be wrapping up in the next few weeks, with the IRS now having used up over 85 percent of the funds available to it for use in stimulus payments and having just recently sent out the smallest batch of payments to date.

This comes as millions of Americans are increasingly pushing for additional stimulus payments in the future, with one online petition now including over 2 million signatures. Democratic members of Congress have also been lobbying the Biden administration for further stimulus payments to be sent out.

It does not appear as though the Biden administration is planning to pursue additional stimulus payments in the near future, instead of looking to generate support for its two proposed pieces of legislation that it says will support long-term economic revival and growth.

The American Infrastructure Plan and American Families Plan do not include provisions for further stimulus payments, and it is unlikely that such measures will be tacked on by Congress. Instead, they will look to support Americans in other ways not involving direct payments.

Americans should instead expect to see indirect benefits afforded to them should the two plans successfully pass into law. The American Infrastructure Plan, for example, will look to create new jobs through investments into a number of areas including manufacturing, transportation, housing, research and development, and digital infrastructure. This follows a recent jobs report which revealed that the United States added only 266,000 jobs during the month of April, a figure that fell way below expectations.

The American Families Plan, meanwhile, will look to further support Americans by enhancing their access to important services. Education is a major focus of the plan, which includes funding intended to guarantee free community college, investments into universal preschool, and enhanced Pell Grant awards, and would seek to improve the quality of education available to many people through a focus on hiring and training additional teachers.

Savings for some Americans could also come in the form of reduced child care costs. Under the plan, qualifying low- and middle-income American families would be guaranteed to pay no more than seven percent of their income on child care for their children under five years of age. Americans would also benefit through twelve weeks of paid family and medical leave.

The plan also proposes to extend the child tax credit that will see eligible parents receive either $250 or $300 per month through 2025.