Biden's Foreign Policy Is Rooted in His Domestic Dreams 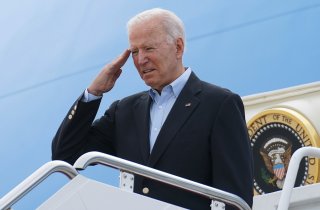 Here's What You Need to Remember: Just as the White House has advanced a flurry of progressive legislation in Biden’s first weeks in office, so too must the State Department pressure foreign governments into adopting progressive social policies.

President Joe Biden took to the State Department earlier this week to chart a radical new course for the United States. In a February 4 speech on “America’s Place in the World,” Biden announced a slew of concrete policy changes: among them, the complete U.S. withdrawal from the Yemen conflict and Washington’s return to the Paris Climate Agreement. In addition, Biden overturned what Donald Trump’s detractors have called the “Muslim ban” and he raised refugee admissions to 125,000 in the next fiscal year. Finally, Biden made clear the U.S. response to the recent Myanmar coup and renewed the New START nuclear arms treaty even as Washington enters into a heightened state of confrontation with the Kremlin.

It was widely expected that Joe Biden would devote his first major foreign policy address to defining himself and his policies against his immediate predecessor. Of particular note is President Biden’s emphasis on “rebuilding” alliances, frayed by Donald Trump, with longstanding U.S. partners. “Over the past two weeks, I’ve spoken with the leaders of many of our closest friends—Canada, Mexico, the UK, Germany, France, NATO, Japan, South Korea, Australia—to being [begin] reforming the habits of cooperation and rebuilding the muscle of democratic alliances that have atrophied over the past few years of neglect and, I would argue, abuse,” said Biden. It likewise comes as little surprise that Biden used his State Department visit to appeal to a professional diplomatic class spurned by Trump’s unorthodox approach to both the practice and content of U.S. foreign policy: “I want the people who work in this building and our embassies and consulates around the world to know: I value your expertise and I respect you, and I will have your back,” he said. “This administration is going to empower you to do your jobs, not target or politicize you. We want a rigorous debate that brings all perspectives and makes room for dissent. That’s how we’ll get the best possible policy outcomes.”

Biden’s critics, notably including Former State Secretary Mike Pompeo, have charged that the President’s speech heralds a return to an Obama-era approach to foreign policy: “I don’t think the American people can afford to go back to eight more years of Barack Obama’s foreign policy,” said Pompeo, adding that he hopes Biden will “move forward with a foreign policy, much more like our America First foreign policy.” And yet, this common Republican critique—namely, that Biden wants little more than to pick up where Barack Obama left off at the end of 2016—is only superficially true. Prima Facie, the President’s generic exaltation of alliances and multilateralism echoes what has often been described as Obama’s strategy of “leading from behind.” Meanwhile, Biden’s professed deference to the North Atlantic Treaty Organization (NATO) has been the stock-in-trade of every postwar American president with the exception of Donald Trump.

But a deeper look at the Biden administration’s emergent policy approach, and many of Biden’s own statements, reveals an altogether different truth. Namely, Biden’s carefully curated repertoire of poll-tested refrains belies a fundamentally radical outlook on the nature of foreign policy, national sovereignty, and America’s place in the international system. Consider the ongoing case of jailed Russian opposition figure Alexei Navalny, who, says Biden, “should be released immediately and without condition.” Biden further stated that “the days of the United States rolling over in the face of Russia’s aggressive actions—interfering with our elections, cyberattacks, poisoning its citizens—are over. We will not hesitate to raise the cost on Russia and defend our vital interests and our people.” It is not immediately clear that the reported poisoning of Alexei Navalny poses a threat to the “vital interests” of the United States or the American people, and yet that appears to be Biden’s working assumption. It’s an assumption that makes apt sense within his broader approach, one that sees foreign policy not through the prism of traditional national interests and geopolitics, but as a battlefield of clashing values.

“There’s no longer a bright line between foreign and domestic policy,” he insisted. Rather, it is all part of the same ideological struggle being waged simultaneously against enemies within and without. Just as the White House has advanced a flurry of progressive legislation in Biden’s first weeks in office, so too must the State Department pressure foreign governments into adopting progressive social policies. Just as the United States “has taken steps to acknowledge and address systemic racism and the scourge of white supremacy in our own country,” so too must Washington rally the world “to defend democracy globally” and “push back the authoritarianism’s advance.” It should be noted that the ranks of the authoritarians, at least according to Biden’s campaign trail rhetoric, include not just Russia but also the “totalitarian regimes” of NATO members Hungary and Poland. Unsurprisingly, some U.S. allies have already taken cue of the drastic tonal shift in Washington. Within several weeks of Biden’s inauguration, Ukraine moved to shut down opposition TV channels that Kiev has accused of spreading “Russian disinformation.”

In its universalist scope, as well as in its purposeful blurring of lines between the foreign and the domestic, Biden’s emergent progressive messianism drastically diverges from the Obama administration’s frequent reluctance to reshape the world and general humility about the limits of American power. It is, rather, a kind of Wilsonianism adapted to the needs of twenty-first-century American political discourse; a conception of politics as an all-encompassing ideological struggle between right and wrong, between good and evil, into which everyone has been conscripted. The full consequences of this approach will be laid bare over the coming years, but one thing is clear: far from a return to any sort of “normalcy,” Biden seeks to renegotiate the basic purpose of U.S. foreign policy over the course of his presidency.