The Bradley Fighting Vehicle Is Getting a Deadly Upgrade 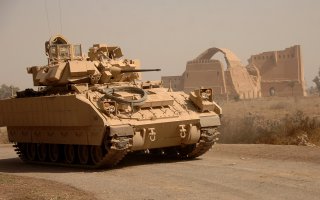 Here's What You Need to Know: This breakthrough technology will help soldiers know what kind of vehicles or aircraft are approaching.

If you were a gunner in a Bradley Fighting Vehicle when, suddenly, you faced both an armored enemy vehicle and an armed aircraft, your position would immediately be vulnerable. In fact, life and death might hang in the balance of how quickly you are able to recognize and attack the approaching enemy targets. Army weapons developers, many of whom have themselves faced rapid or unexpected incoming enemy fire, understand this, which is why the service is fast-tracking an artificial intelligence-enabled computer technology called “Aided Target Recognition.” (AiTR)

The system, as described by former Bradley gunner and commander Gen. John Murray, now the Commander of Army Futures Command, introduces the possibility of identifying enemy targets in milliseconds at a 98-percent rate of accuracy.

“The algorithm makes a decision on whether that is a target or not a target, then it slews the weapons system to that target and lays in the right firing solution and the right ammunition to engage that target,” Murray told The National Interest in an interview.

The concept is to draw upon AI-enabled computing to instantly bounce incoming sensor data against a known database, perform near real-time analytics, and inform human decision makers of an optimal method of response or counterattack.

One could liken the technical concept to an F-35 stealth jet fighter’s Mission Data Files, a compiled library of specific, well documented threats specific to key geographical regions used to instantly make target identification in response to incoming sensor data. A fighter pilot, for instance, might know within seconds that the image appearing on a targeting sensor was, in fact, a Chinese aircraft approaching for attack.

“When I was a gunner, or a commander of a Bradley fighting vehicle, with my gunner, we had two independent sites, and you break up the battlefield, and you scan for targets on different parts of the battlefield, usually at about a 180 degree arc, and then you cross over and go back their direction to make sure that, you know, the gunner didn’t miss anything,” Murray said, explaining the targeting and counterattack processes in place before the advent of AiTR. Essentially, prior to the arrival of AI-enabled AiTR, armored vehicle gunners had to rely exclusively on the well-trained human eye to discern, distinguish and identify incoming targeting information.

“I clearly remember sitting with flashcards with young soldiers and quizzing them on vehicle identification,” Murray recalled.

In the absence of any kind of automated target recognition computer technology, or detailed database of known threats, human gunners would, according to Murray, simply “sit there and go back and forth looking for targets. And of course, you know, if you’re on a real live battlefield, targets try to make themselves hard to detect. So imagine an algorithm that does that scanning automatically? It could pick up targets at a much higher rate of traverse,” Murray said.

Aided Target Recognition technology is progressing quickly, and it is based upon the widely held tactical concept that combat success is best accomplished by achieving the optimal mix of AI-enabled computing and uniquely human attributes such as intuition, various kinds of reasoning and more subjectively determined decision-making.

“The idea is to allow machines to do what machines do best and keep humans focused on what humans do best,” Murray said.

There is yet another crucial factor related to fast target identification, and it pertains to concerns that enemies might be quick to use lethal force in the absence of clear target determination, while U.S. military doctrine requires actual “target identification.” Ethical factors taken into account by the U.S. military could therefore disadvantage U.S. forces confronting a less scrupulous enemy. This quandary was explained well to me by Brig. Gen. Ross Coffman, Director, Next Generation Combat Vehicles Cross Functional Team, Army Futures Command as “our enemies may shoot on ‘detect.’ We shoot on ‘identify.’”

Also, AiTR is still somewhat of an emerging technology and therefore faces challenges, given that any AI-empowered system is only as effective as its volume, accuracy, scope and reach of its “trained data,” meaning it needs to reliably process new incoming information that it may not already be “trained” on or have already learned and integrated into the existing database.

“If the algorithm is trained properly and if we’ve got the right training data and the training data is not corrupt ...98% accuracy is not unimaginable by any stretch of the imagination,” Murray said.

The Army has been fast-tracking ways to improve AiTR and, just last year, sent a “solicitation” to industry aimed at enhancing AiTR’s functionality and reliability amid fast-changing, dynamic combat circumstances.

“The Army desires innovative approaches for improving performance, robustness, and/or training efficiencies for Army AiTR systems. This is due largely to dynamic and unpredictable operating environments, uncooperative targets (e.g., partially concealed or in tree lines), and of course a shortage of data relevant to the problem space,” the solicitation writes.

As for other specific areas of intended improvement, the Army’s previous solicitation asks innovators to help engineer an “an improved probability of detection and false-alarm rates for AiTR algorithms against Army relevant targets with infrared (IR) imagery.” The concept here is to strengthen, refine, train and expand the database such that immediate, accurate identification can take place, ideally on a much faster loop than an enemy by behind ahead of or “inside of” an enemy’s decision-making cycle.

Also, per Murray’s point, the solicitation seeks to improve the speed and accuracy of data training itself, stating that the Army seeks “methods to quickly update a trained algorithm to a new target of interest without requiring the algorithm to retrain on previous target data.”