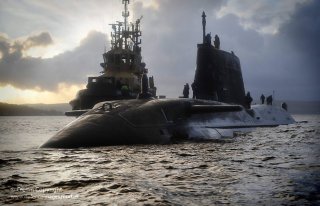 The downside for submarine crews is that you're likely to spend days or even weeks without being able to take in the fresh air. However, one of the perks of joining any military navy is that you'll get to visit far-off ports. No doubt the crew of the Royal Navy's Astute-class nuclear-powered submarine HMS Artful (S121) will be happy to get back on dry land for a few days even if they can't see the sights. The boat arrived in the South Korean port city of Busan earlier this week.

The submarine docked at the port of the Republic of Korea's Naval Operations Command early Wednesday ahead of the Royal Navy's flagship aircraft HMS Queen Elizabeth, which had recently conducted a transit of the South China Sea. The carrier and its strike group will make a port-of-call visit to Busan later this month.

Artful had joined UK Carrier Strike Group 21 on its seven-and-a-half month-long maiden operational deployment to the Far East in May. The submarine, which can purify water and air, is able to circumnavigate the planet without resurfacing. Her main limit is that the boat can only carry three months' worth of supplies of food for the crew of ninety-eight officers and ratings.

Rearm and Some Relaxing

While in the South Korean port, the submarine's crew will examine its equipment, load munitions, and take COVID-19 tests—the latter being the new normal for sailors when they arrive in distant ports.

"We will implement anti-COVID-19 measures during their stay in close cooperation with the health authorities. No joint activities with our Navy are planned," defense ministry spokesman Boo Seung-chan said during a regular press briefing.

Coronavirus has remained a serious problem for the Royal Navy. British Secretary of State for Defense Ben Wallace confirmed that members of the crew aboard the carrier strike group's four ships had tested positive for the virus.

The 64,000-ton Royal Navy flagship and its strike group arrived in the Asia-Pacific region last month, and have already conducted joint exercises with India and Singapore, while also making a port of call to the Pacific island of Guam.

After her visit to Busan later this month, HMS Queen Elizabeth will travel to Japan in September, before beginning the return trip to the UK. However, it won't mark the end of the Royal Navy's presence "east of Aden." The UK has announced that as part of its Global Britain initiatives, the Royal Navy will permanently deploy two offshore patrol vessels to the region later this year.

While the UK's partners in the regions have responded positively to a return of the Union Jack flying over the neutral waters, not every government is pleased with that decision. Beijing has decried what it has called neo-colonialism, while North Korea also slammed the carrier group's deployment, suggesting it was a provocation that would escalate tensions in the Asia-Pacific.

For the crew of the Artful, it is probably just time to get out of the submarine even if they have to remain quarantined in the port.