A New Aircraft Carrier Is Headed to the South China Sea Next Year (Not From China or U.S.) 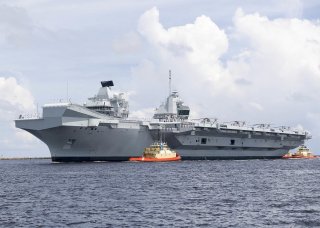 The Royal Navy’s brand new £3 billion aircraft carrier HMS Queen Elizabeth will be deployed to the Far East to take part in military drills with the U.S. Navy and Japan. According to reports from the British media the carrier, known as “Big Lizzie,” will visit the Far East during a grand maiden voyage and will carry out joint military exercises.

The sailors shouldn't need to brush up on their Asian language skills just yet however. The deployment to the Far East won't come until the ship makes its maiden voyage next year.

However, when it does occur it will be notable as the Royal Navy hasn't had a permanent military or naval presence "East of Suez" since the early days of the Cold War. While the Royal Navy once had bases around the world thanks to the fact that the "sun never set on the British Empire," those days are long in the past and that sun has truly set. The Falklands War in 1982 was the only recent exception where the Royal Navy operated far from its home waters or near London’s few remaining colonial outposts.

On its Far East deployment HMS Queen Elizabeth will be accompanied by other warships including two Type 45 destroyers and two frigates, while the carrier's air wing will include two squadrons of F-35B Lightning II jets.

As The National Interest previously reported, the new carrier is able to carry up to thirty-six naval short-takeoff and vertical landing variants of the U.S. F-35 Stealth fighter. At 65,000 tons, the gas-turbine carrier is smaller than the U.S. Navy's 100,000-ton Ford­-class nuclear-powered carriers but the Royal Navy warship is more highly automated. It has a crew of about 800 sailors, not counting the carrier's air wing, compared with 2,600 for the U.S. carriers.

HMS Queen Elizabeth began to take on its air wing in June, and that included fighters from the famous 617 Squadron, which is known as the Dambusters for its actions during Operation Chastise against German dams during the Second World War.

A Strong Message to China

The announcement–if not the actual deployment–has come amid growing tension between London and Beijing, including calls for Chinese tech firm Huawei to be excluded from helping build Great Britain's superfast 5G mobile network. The United States–along with other partners of the intelligence-sharing Five Eyes nations–have expressed concerns that the British government would allow the Chinese firm, which has been accused of spying for Beijing, to play a crucial role in the deployment of the new wireless network.

President Donald Trump has been a vocal critic of China's attempts to gain a foothold in western critical infrastructure.

In addition, British Prime Minister Boris Johnson has spoken out against the Chinese clampdown on Hong Kong's freedoms, while he has also called for an inquiry about the true source of the novel coronavirus as rumors have circulated that it was accidentally leaked from being studied in a Wuhan laboratory. Johnson is among the most notable world leaders to have personally contracted the coronavirus, but he has since made a full recovery.

While Big Lizzie will likely join U.S. and Japanese warships next year, the future strategy of the British carrier deployment is also coming into focus. The British media has added that HMS Prince of Wales, the second new Royal Navy carrier and sister ship of the HMS Queen Elizabeth, will also likely be sent to the region when it is completed and finishes training.

That could still be two years from now, but once both ships are operating one could be based in the Indo-Pacific region while the other would support NATO operations in the North Atlantic. The big question is where the carrier could be based. After all, as noted, the Royal Navy doesn't have any real permanent presence East of Suez.

It should also be remembered that the last time a ship bearing the name HMS Prince of Wales was dispatched to the Far East as a show of strength against imperialist aggression it didn't end so well. However, back in early 1942 that vessel was a battleship, not a carrier, and it is likely that any Royal Navy presence will have support from allies and partners in the region.

HMS Queen Elizabeth is the largest carrier in service with the Royal Navy, and the first since the HMS Ark Royal was decommissioned in 2011. Since April the ship has undergone a series of quarantine procedures to ensure its crew is safe from the coronavirus.