Can Russia’s New Fighter Jet Perform Well at Such a Low Price? 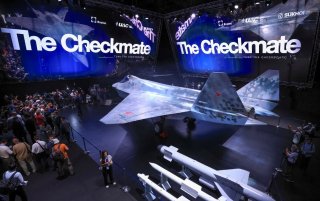 Here's What You Need to Remember: Versatile and affordable, Checkmate has the trappings of a successful export product. All that remains to be seen is whether or not the fighter can live up to Rostec’s ambitious performance and pricing claims.

Russia’s Checkmate fighter jet is primarily an export product, with Rostec staking the plane’s success on a steady stream of market demand. But who would buy the new fighter, and why?

Judging by its stated specifications and features, Checkmate is a fast, stealthy, high-flying, and light multi-role fighter with an impressively large payload for its class.

And yet, what really sets it apart is its staggeringly low price of $25-30 million per model. This makes Checkmate arguably a far better value proposition than the two competitors that it’s being positioned against: the French Dassault Rafale and Swedish JAS-39 Gripen. But there are some caveats to consider, with the first and most obvious being the Checkmate’s wildly optimistic price tag.  At $25-30 million per model, the Checkmate would cost less than half that of the less advanced Su-35S while also being substantially cheaper than Russia’s other fifth-generation fighter, the Su-57.

The manufacturer, Rostec subsidiary Sukhoi, says it slashed Checkmate’s costs with AI-assisted production methods and by recycling some of the technologies previously developed for the Su-35S and Su-57, but only time will tell how accurate these early price assessments are. Even if technically true, $25-30 million could simply be the baseline price before customer-specific weapons/avionics configurations, modifications, and conversions are factored in. This is not to suggest that Checkmate can’t be competitive in export markets—to the contrary, the fighter is still in a position to offer solid value to certain customers even if the price tag turns out to be slightly higher than expected.

The fighter’s much-anticipated reveal was preceded by a weeks-long marketing campaign, headlined with a slick teaser video that singled out four potential customers: India, Vietnam, Argentina, and the United Arab Emirates (UAE). The messaging seemed to change slightly on the day of the presentation, with Deputy Prime Minister Yuri Borisov telling reporters that “firstly, the aircraft will be oriented toward African countries, India, and Vietnam.” It’s unclear why Africa wasn’t more heavily emphasized in Rostec’s earlier marketing blitz over the course of July. Algeria and Egypt fit the profile of major arms importers who would potentially be interested in the Checkmate. Both have reportedly purchased Russian military aircraft in recent years, and are open to doing so again. The UAE has mulled over purchasing Russian fighters for years, first the Su-35 and later the Su-57—the Checkmate represents the Russian defense industry’s latest attempt to expand its presence in a Middle-Eastern market that is still dominated by American military hardware. The Vietnamese Air Force showed interest in the Su-57 as early as 2017, but those negotiations appear to have stalled. The versatile and significantly more affordable Checkmate could be a more palatable option for Hanoi over the heavier, more specialized Su-57. India is in the midst of developing two indigenous fighters, the Tejas Mark 2 and Advanced Medium Combat Aircraft (AMCA), which may dampen New Delhi’s appetite for procuring a foreign fighter with partially overlapping capabilities.

Russian officials are projecting confidence in Checkmate’s market performance, with Borisov estimating an initial demand for as many as three hundred fighters. Versatile and affordable, Checkmate has the trappings of a successful export product. All that remains to be seen is whether or not the fighter can live up to Rostec’s ambitious performance and pricing claims.