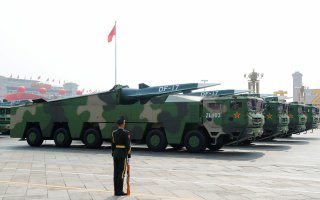 Here's What You Need to Know: Initial thoughts were that a Glide Phase Interceptor might not come to fruition until the 2030s, however, several promising more recent developments are now indicating that the arrival of this kind of technology may be sooner than expected.

Could there truly be a way to track and intercept or destroy enemy hypersonic missiles speeding at more than five times the speed of sound while skipping along the upper boundaries of the earth’s atmosphere before descending upon targets?

Maybe, depending upon the speed and success with which the Missile Defense Agency is able to develop a new generation of hypersonic defense called the Glide Phase Interceptor, a developmental program to engineer a high altitude, long-range missile able to fire from the ground or deck of Navy ship to “take out” a traveling hypersonic missile during phases of its flight when it might be more vulnerable to destruction.

A hypersonic boost-glide weapon, for example, is thrust up into the atmosphere to glide at hypersonic speeds before descending upon its target at unparalleled speed. It is at this “glide” point in the missile’s trajectory where there is the best opportunity to intercept it, just prior to its turning down into its ultimate high-speed descent.

“So when you’re in the glide phase—which is higher up from the terminal, right, where a hypersonic vehicle is likely in its most vulnerable phase—that’s actually a pretty tough environment to be in. And you can’t take an air defense weapon and operate it there nor can you take a space weapon like an SM-3 and operate there, it’s just a different environment,” Navy Vice Adm. Jon Hill, the director of the Missile Defense Agency, told reporters, according to a Pentagon transcript.

Hill explained that the agency is now “maturing technologies” and working with industry to evolve “seekers and materials for operating” in that portion of the atmosphere, as well as exploring propulsion techniques to succeed in firing an interceptor capable of reaching and destroying a hypersonic weapon during its glide phase.

Initial thoughts were that a Glide Phase Interceptor might not come to fruition until the 2030s, however, several promising more recent developments are now indicating that the arrival of this kind of technology may be sooner than expected, Hill said. This is due to resulting data collected from live fires during experiments with ship-based Aegis radar models and ground systems.

“We found that we can close the fire control loop with an Aegis ship that has already proven queuing launch-on-remote and engage on remote capability,” Hill said. Launch-on-remote is an advanced fire control technology system wherein interceptor missiles can be directed from dispersed locations through networking, enabling new range and delivery options for firing interceptors. Launch-on-remote is something that became possible in recent years through upgrades to ship-integrated Aegis radar systems and networking developments enabling dispersed assets to pass targeting information and other crucial data to shoot off interceptors.

The agency also intends to integrate Glide Phase Interceptor with an emerging now-in-development high-tech, hypersonic weapons tracking satellite called the Hypersonic and Ballistic Tracking Space Sensor (HBTSS). The entire concept, from launch on remote to satellite missile tracking technology, is based upon target detail networking and a need to establish a continuous “track” on a fast-moving hypersonic missile. Given the speed at which hypersonic missiles travel, it could otherwise be difficult for separate radar apertures or fields of view to pass target tracking flight details from one geographical segment to another, given the pace with which hypersonics can transit from one major area to another. This creates an essential need to establish a steady, continuous target track sufficient to target and destroy the missile.

“HBTSS is on the path to launch two interoperable satellites that are built by two separate industry partners. So the idea is to keep competition in early, given the complexity of the mission. It is the only program within the space portfolio that provides fire control quality data down to a weapon system like Glide Phase Interceptor,” Hill said.