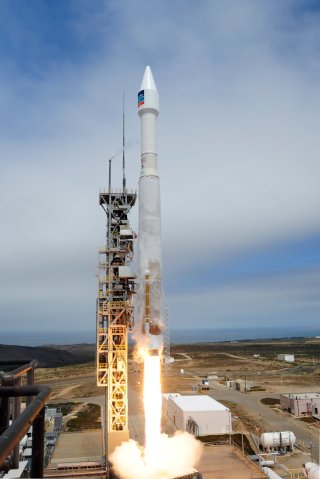 Here's What You Need to Know: Some of these may include longer-range, higher-fidelity cameras and sensors. Perhaps most of all, GA-EMS and its partners may be exploring AI-enabled information analysis.

The United States Space Force is working with industry partners to architect a new generation of weather satellites capable of “seeing” through smoke, sand, heavy clouds, snow, and other weather obscurants to greatly expand opportunities for success and efficiency in military operations.

“The GA-EMS EWS spacecraft will now be able to provide extended operations, direct broadcast of weather data to tactical users, and increased reliability to meet mission requirements,” Scott Forney, president of GA-EMS, said in a company statement. “This pivot, from solely an on orbit sensor demonstration program to now include residual operational capabilities, illustrates the confidence in GA-EMS’ design to perform as needed and ensure the USSF can continue to provide critical weather information to warfighters around the globe.”

A key context is the rapidly approaching end of life for the Defense Meteorological Satellite Program (DMSP).

“The GA-EMS EWS spacecraft will be ready to fill the EO/IR sensor gap as the DMSP quickly approaches obsolescence and end of life, while also providing the USSF with a next generation advanced weather satellite, sensor and weather products for national security missions,” a senior officials from Missile Defense and Space Systems at GA-EMS, said.

As part of the effort, GA-EMS leads an industry team including EOVista and Parsons Corporation to build the Enterprise Ground Station.  The program is of great importance to the USSF and has been up-scoped from a one year on orbit sensor demonstration to a three-to-five year prototype spacecraft with “residual operational capability.”

While technical specifics of relevance to the exact offerings are not likely available for security reasons or due to the ongoing competition, it would seem quite possible that the new satellite system is being designed to leverage a new generation of technologies.

Some of these may include longer-range, higher-fidelity cameras and sensors. Perhaps most of all, GA-EMS and its partners may be exploring AI-enabled information analysis. Often called PED, for processing, exploitation and dissemination, incoming data is pooled, analyzed, organized and then tailored for transmission to decisionmakers. The intent is to identify the most significant and pressing objects or developments from among massive volumes of data with as little latency as possible.

A high-speed AI-empowered computing system could naturally massively expedite this process by comparing incoming data against a vast database to make predictions, assess new weather indications as they relate to previous weather patterns and developments and make informed, highly detailed projections for military decision-makers. Given the pace of innovation in this area, it seems likely that this kind of data analysis and transmission specific to tactical national security circumstances would deliver truly unprecedented capability, as described by GA-EMS developers.

Military planners have been thwarted by the elements in every era of human history; that may be changing. The capabilities coming online from industry innovators like General Atomics may permanently deliver a new normal for what military leaders can and should expect to see.