These New Army Cannons Will Shoot Drones Out of the Sky 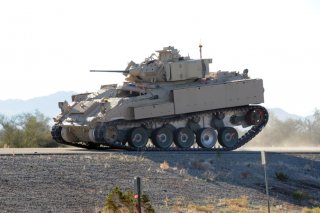 What if an armored ground convoy was closing to contact with an enemy force in position to breach or penetrate a mechanized formation when two hostile armed drones suddenly appeared from behind a mountain? The approaching ground vehicles, primarily armored to engage in linear force on force ground combat, could be vulnerable to a drone air attack. This would be particularly true if the approaching force lacked air supremacy or any kind of air support.

This type of potential combat scenario is becoming increasingly likely as adversaries continue to acquire and develop more technologically advanced armed attack drones. Drone defense has been becoming more prominent in recent years, particularly when it comes to base protection or defending fixed infrastructure. Much progress has been made in the realm of sensing, interceptor missiles and AI-enabled threat detection. But what about drone defense from the ground while on the move? This challenge has been a large focus for the Army and its industry partners as it continues to evolve ground vehicles primarily designed for platforms able to track and destroy enemy drones while moving on the ground.

With this in mind, the Army is now experimenting with arming a range of emerging platforms with different caliber cannons to establish an optimal blend of air-and-ground on-the-move attack capability. The success of this kind of tactical approach relies upon a host of interwoven variables to include speed and weight of a vehicle and advanced targeting, sensing, and computing intended to expedite sensor-to-shooter pairing while on the move. These factors inform ongoing Army work on its new Robotic Combat Vehicle, Mobile Protected Firepower Light Tank, and Optionally Manned Infantry Vehicle Bradley replacement while also contributing to the continued modernization of upgraded existing vehicles such as the Stryker Vehicle.

“We're keeping our options wide open and keeping everything on the table. Because there's some really interesting technologies being developed to allow a smaller caliber to perform what was once traditionally thought of as unique to a larger caliber weapon. We're really excited about the 25mm To 30mm to 50mm,” Maj. Gen. Ross Coffman, Director for Next-Generation Combat Vehicles Cross-Functional Team, told the National Interest in an interview.

“These are providing trade spaces for Army senior leaders to make decisions that will absolutely change the geometry and the lethality of future data,” Coffman said.