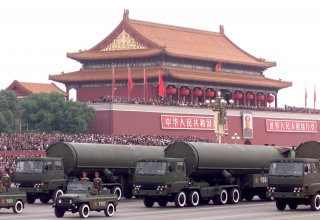 Here’s What You Need to Remember: While these developments exacerbate existing problems, their relative danger to the United States may collectively be less significant than the threat posed by China’s Dong-Feng 17, which is equipped with a hypersonic glide vehicle.

China’s fast-expanding arsenal of missiles involves a large-scale increase in the size of its mission, according to a Defense Department report on China that was published earlier this year. The department has flagged recent advancements that have been made by the People’s Liberation Army Rocket Force (PLARF).

“In 2020, the PLARF launched more than 250 ballistic missiles for testing and training,” according to the report, titled Military and Security Developments involving the People’s Republic of China. “This was more than the rest of the world combined.”

China’s “carrier-killer” Dong-Feng 21D (DF-21D) and Dong-Feng 26 (DF-26) have been on the Defense Department’s radar for many years. The PLARF’s growing inventory of DF-26 intermediate-range ballistic missiles are now capable of “conducting both conventional and nuclear strikes against ground targets as well as conventional strikes against naval targets,” according to the report. China is known to test these missiles and adjust them so that they are better able to track and destroy moving targets at sea. China’s ability to hit moving targets at sea, such as carrier aircraft, has been somewhat questionable. However, the technology required to perform this feat will quickly improve.

“In 2020, the PRC fired anti-ship ballistic missiles against a moving target in the South China Sea, but has not acknowledged doing so,” the report states.

The report notes that China’s DF-21D poses a growing risk. Its range exceeds 1,500 kilometers and it uses a reentry vehicle that “is reportedly capable of rapidly reloading in the field,” the report states.

China’s growing missile arsenal continues to spark concerns. Its efforts to harness new missile innovations for new programs are equally concerning. These technological enhancements could put China in a position to overwhelm, jam or disable air defense in Guam, Japan or Taiwan. An attack by the PRC could include firing missiles or using new targeting guidance, seekers and datalinks capable of adjusting missile trajectory as needed.

While these developments exacerbate existing problems, their relative danger to the United States may collectively be less significant than the threat posed by China’s Dong-Feng 17, which is equipped with a hypersonic glide vehicle.