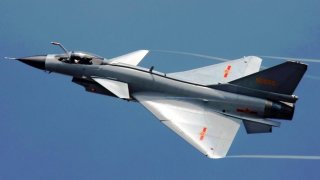 Here's What You Need to Remember: Much like the U.S. Air Force with its mix of stealthy and non-stealthy fighters, the Chinese air force is developing a two-tier fighter fleet. Alongside a handful of radar-evading J-20s, Beijing is acquiring hundreds of more conventional J-10s.

While observers focus their attention on China's new J-20 stealth fighter, the Chinese air force steadily is improving and building more copies of an only slightly less sophisticated fighter: the J-10.

Much like the U.S. Air Force with its mix of stealthy and non-stealthy fighters, the Chinese air force is developing a two-tier fighter fleet. Alongside a handful of radar-evading J-20s, Beijing is acquiring hundreds of more conventional J-10s.

The single-engine, single-seat J-10, a product of the Chengdu Aircraft Industry Group in southwestern China, first flew in 1998 and entered front-line service in 2003. Featuring a tailless delta wing and canards, the 51-feet-long J-10 externally is similar to the defunct Israeli Lavi fighter, although there's no proof that Beijing deliberately copied the Israeli design.

In performance and mission, the supersonic J-10 is similar to the U.S. Air Force's F-16. It's capable of air-to-air and air-to-ground missions.

The 2018 edition of the Pentagon's annual report on Chinese military capabilities describes the latest J-10C variant as an "advanced fourth-generation fighters armed with the latest weapons."

As of late 2017, the Chinese air force possessed around 260 J-10s, according to Flight Global's annual survey of world air arms. J-10s account for 15 percent of Chinese combat aircraft and nearly half of the roughly 600 Chinese warplanes that, in 2018, the U.S. Defense Department considered modern.

The growing J-10 force stays busy with exercises and air sovereignty patrols. In the fall of 2018, J-10s flew alongside other Chinese warplanes in a war game that the Chinese air force called "a solid step towards comprehensive combat capability."

Beijing is continuing to improve the J-10 even as it develops the J-20 and other new fighter types. At the biennial air show in Zhuhai in early November 2018, a J-10B fitted with a thrust-vectoring engine novel demonstrated extreme maneuverability.

The new J-10C model, which reportedly entered front-line service in 2018, sports a new engine inlet that apparently reduces the plane's radar signature. The J-10C might also have an electronically scanned array radar, which is more powerful and reliable than conventional sensors are.

Despite China's rapid improvement of its fighter force, it's still smaller and less modern than is that of its main rival. In 2018 the U.S. military possessed no fewer than 2,800 fighters including more than 900 F-16s and hundreds of F-22 and F-35 stealth fighters.