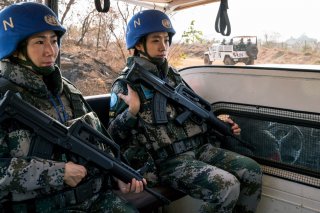 Here's What You Need To Remember: With over 1.6 million Ground Forces soldiers, the PLA has the largest army on the planet. Whatever weapon is designated its standard rifle will likewise be produced and fielded on a massive scale. It will be interesting to see what additional information is released on the new rifle—a name, for example, would be nice—and whether its integration into the PLA will be tied to continuing efforts to professionalize Beijing’s ground forces to prepare them for the complexities of modern battlefields.

The grandiose military parade that rolled past Tiananmen Square to celebrate the Seventieth Anniversary was an embarrassment of riches for observers of the People’s Liberation Army. Amidst a procession featuring dozens of city-destroying intercontinental ballistic missiles, supersonic stealth fighters, robot submarines, stealth drones, and hypersonic cruise missiles, the PLA’s flourishing of a brand-new assault rifle may have seemed beneath mention.

The first hint the PLA was considering replacing its standard QBZ-95s rifle emerged in 2016-2017 through two images shared in a Chinese blog. That initial post was later elaborated upon in U.S. media, most notably by Popular Science and The Fire Arms Blog.

More recently, just days prior to the anniversary parade, a few images leaked out. These photos revealed a design very similar to the earlier 2016-2017 photos. Finally, on October 1, 2019 thousands of the weapons were televised before the global public, signaling the PLA’s intention to adopt it as a new service rifle.

The new weapon’s designation remains unconfirmed. Chinese state television merely commented “This new assault rifle has a comfortable layout and the concept of modular design, which possesses the advantages of high power, high reliability, and versatility.”

However, according to an in-depth piece on The Firearms Blog by Anthony J., its designation may be the QBZ-191. Other commentators speculate it may be called the QBZ-17 or QBZ-19—after the year of its entry into service.

The new weapon will replace the QBZ-95 bullpup-style rifle that was introduced in 1997. At the time, the QBZ-95 also introduced the unique Chinese 5.8-millimeter round, touted as having greater energy than U.S. 5.56-millimeter rounds. The introduction of a rifle with greater long-range accuracy reflected a post-Gulf War drive to modernize the PLA’s old-school ground forces that had previously been focused on how to win mass warfare against technologically superior foes.

Three million QBZ-95s were built, including carbine and light support variants with a 75-round drum magazine. China also exported a 5.56-millimeter variant called the QBZ-97 which is used to varying degrees by armed forces in Laos, Myanmar, Pakistan, the Philippines, Rwanda, and Sudan.

Around 2012, China also began issuing the improved QBZ-95-1 model using a heavier round and barrel and boasting improved ergonomics and recoil absorption. But the QBZ-95-1 was not integrated army-wide, suggesting the PLA was already looking ahead to a larger change.

A bullpup rifle incorporates the action and magazine behind the trigger, giving bullpup rifles a distinctly futuristic and stubby appearance. By integrating these components into the stock, bullpup weapon can generate the same velocity as a longer conventional rifle in a more compact and potentially lighter package. Major bullpup designs include the Austrian Steyr Aug, the French FAMAS, the Israeli Tavor X95, and the British SA80 rifle.

But the bullpup layout has downsides. In addition to some users finding them ergonomically awkward, a bullpup user must place their face closer to the action for aimed fire, increasing the risk of mishaps with spent ammunition casings, misfired rounds, and collision with protruding mechanisms.

While the PLA does not usually comment on the shortcomings of its weapons, Chinese military bloggers were unsparing in their criticisms. One notes that the that the weapon’s engineering precluded it from having modular components or incorporating a folding stock and that the ability to reduce weight by using composite plastics makes the ergonomic tradeoffs of the bullpup unnecessary.

It also claims that the primer used by the 5.8-millimeter bullets fails to burn off cleanly when discharged, causing residue to build up that made the gas regulator and piston difficult to remove during a standard 2,000-round maintenance cycle. The residue buildup also supposedly causes pressure within the muzzle to increase, increasing noise, muzzle flash, and risk of accidents.

Another apparent vote of no-confidence came in China’s later production of a more conventional QBZ-03 assault rifle apparently inspired by American small arms. The QBZ-03 was issued to police and second-line units who were deemed “more familiar” with the layouts of China’s earlier conventional rifles, the Type 56 and Type 81.

Anthony’s piece also reports that the weapon retains the 5.8x42 millimeter bullet of its predecessor, but that “it's confirmed the PLA has adopted new 5.8x42mm rounds that have better performance on medium to long-range.”

If true, this would square with the increasing emphasis on longer-range marksmanship in professional armies, as well as growing concerns that greater penetration will be needed to overmatch modern body armor used by adversaries in a high-intensity conflict. A higher energy round could retain greater accuracy and penetration over longer distances.