Is China Ready to Unleash Its New Type 05 Amphibious Vehicle? 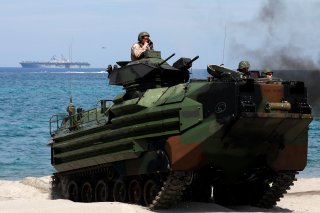 Here's What You Need To Remember: Though amphibious, the latest Type 05 variant seems to have a more land-based reconnaissance role than its predecessors—and is still arguably better than the U.S. Marine Corps’ amphibious vehicles.

The People’s Liberation Army Ground Force apparently has a new amphibious armored reconnaissance vehicle. The vehicle, which appears similar to China’s Type 05 amphibious fighting vehicle (and which you can read about here), was reported on by Jane’s.

The Type 05 variant was seen in a clip broadcast by China's Central Television 7, a state-owned station. Interestingly, rather than the blue pixelated ocean camouflage that Type 05s have typically been seen in, this Type 05 variant opted for an olive green paint job, indicating its potential primarily land-based role as a reconnaissance platform.

To that end, the Type 05 variant appears to have either a much smaller turret, or to have foregone a turret all together in order to accommodate a mast equipped with “an electro-optical and infrared (EO/IR) system, a laser-range finder, and an X-band radar,” Jane’s explained.

There is also space on the top of the hull for a catapult system that can apparently launch a small unmanned aerial vehicle (UAV) for greater battlefield situational awareness, surveillance,  or target acquisition.

The Type 05 has several interesting design features that just might make it one of, if not the fastest amphibious assault vehicle currently in production. The design benefits from a hydraulic bow flap that extends when in water. The large flap acts like a ship’s bow and allows the vehicle to skim over the surface of the water much like a speedboat does. When on land, the bow folds up and into the front hull glacis, giving the Type 05 a small amount of forward armor protection.

In addition, the Type 05’s road wheels are able to retract somewhat, bringing them closer to the hull and streamlining the design. These two features together give the Type 05 an incredibly fast 28 kilometers per hour—or about 17 miles per hour — when traveling through water. For comparison, the USMC’s legacy AAV is capable of just over 8 mph in the water. Even the Corp’s brand-new Assault Combat Vehicle is capable of only about 7 miles per hour in the water.

In addition, the Type 05 is more heavily armed than the United States Marine Corps’ Assault Amphibious Vehicle. Though the AAV is armed with both a .50 caliber M2 heavy machine gun and a Mk 19 grenade launcher, these pale in comparison to the Type 05’s 30mm turret-mounted main gun, or 105mm cannon that some light tank variants are equipped with.