For China, Seizing Taiwan May Be More Trouble Than It’s Worth 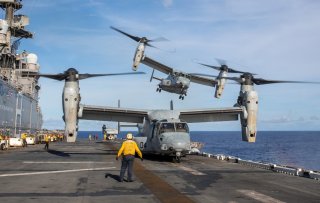 Here's What You Need to Remember: there seems to be a never-ending series of provocations and warnings, including bold statements from the Chinese that they are specifically well positioned to destroy what their government calls “foreign interventions” into a possible conflict with Taiwan. Meanwhile, the risks and potential costs of war with the United States may simply be too high for China to actually initiative a military offensive against Taiwan.

Are the United States and China truly on the brink of war over Taiwan? Or could one simply observe that there appears to be a never-ending measure of escalation with verbal exchanges, military drills and exercises and geopolitical posturing?

Meanwhile, the United States has in a comparable way, massively up-ticked its own exercises in the region with a dramatic increase in drone surveillance missions, bomber patrols, and Carrier Strike Group exercises. America has also carried out dual-carrier power projection warfare preparation operations in the vicinity of Taiwan. In addition, the U.S. Navy has for years conducted Freedom of Navigation Operations throughout disputed regions of the South China Sea to, at least in part, challenged China’s provocative territorial claims and phony island building in the area. These included pointed and quite deliberate efforts to sail within the so-called disputed twelve-mile territorial boundary near islands erroneously claimed by China.

While there has been serious concern about miscalculations, misunderstanding and possible unintended military confrontations or even an exchange of fire, neither side is likely to give a “go-ahead” for any kind of first strike. U.S. and Chinese ships have sailed quite close to one another, U.S. bomber patrols have specifically flown quite close to being directly overhead Chinese targets and Chinese fighter have actually flown “over” coastal areas along the Taiwanese border.

However, there seems to be a never-ending series of provocations and warnings, including bold statements from the Chinese that they are specifically well positioned to destroy what their government calls “foreign interventions” into a possible conflict with Taiwan. Meanwhile, the risks and potential costs of war with the United States may simply be too high for China to actually initiative a military offensive against Taiwan. Conversely, while the United States clearly wants to challenge Chinese provocations and formally “deter” China from taking any kind of aggressive action, it seems clear that America is by no means likely to launch a first strike upon Chinese forces.

Does this make all of the Chinese provocations, war preparations and public comments about its power projections somewhat useless and potentially even irrelevant? The answer may be yes.

Kris Osborn is the defense editor for the National Interest. Osborn previously served at the Pentagon as a Highly Qualified Expert with the Office of the Assistant Secretary of the Army—Acquisition, Logistics & Technology. Osborn has also worked as an anchor and on-air military specialist at national TV networks. He has appeared as a guest military expert on Fox News, MSNBC, The Military Channel, and The History Channel. He also has a Master's Degree in Comparative Literature from Columbia University. This article first appeared in November 2020.