China Wants Six Aircraft Carriers by 2035. Can It Build Them? 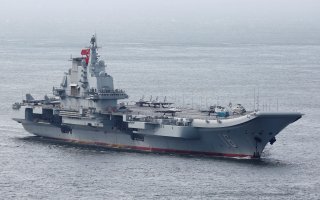 Here's What You Need to Know: China wants to rival the United States as an aircraft carrier superpower.

A series of satellite images from the Jiangnan shipyard, published by a China-focused think tank in 2020, shed light on the ongoing construction of China’s Type 002 carrier. The images reveal a typical military vessel construction site, replete with a floodable basin and multiple sluice gates. While the haziness of the photos makes it difficult to discern the carrier’s dimensions, the hull appears to measure forty meters in width by forty-eight meters in length. If prior reports are accurate, Type 002 will be larger and much heavier than its predecessors at a displacement of up to eighty-five thousand tons versus the sixty thousand to seventy thousand tons. The carrier is widely expected to feature a conventional propulsion system, though other technical details remain scant.