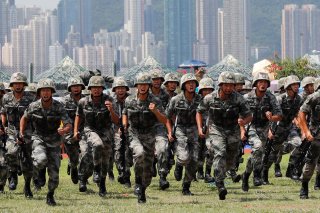 Here's What You Need to Know: Today the U.S. military possesses arguably more combat experience than any other armed forces, owing to the long-term American-led operations in Iraq, Afghanistan, and elsewhere. But it's debatable whether this experience in low-intensity warfare would matter in what would probably be a high-tech war with China.

At the time, the Vietnamese military was still fresh from its defeat of the U.S. and allied forces in the early 1970s. The Chinese Communist Party, by contrast, had gutted its own armed forces through politically-motivated purges.

But that doesn't mean Beijing can't "win" a major war. Although it's debatable whether any party truly would "win" in such a conflict, given the potentially profound loss of life and the economic, ecological, and political chaos that surely would result from the war.

Today the U.S. military possesses arguably more combat experience than any other armed forces, owing to the long-term American-led operations in Iraq, Afghanistan, and elsewhere. But it's debatable whether this experience in low-intensity warfare would matter in what would probably be a high-tech war with China.

This article first appeared in December 2018 and is being reprinted for reader interest.