China's Next-Generation Strategic Bomber Could Look Like the B-2 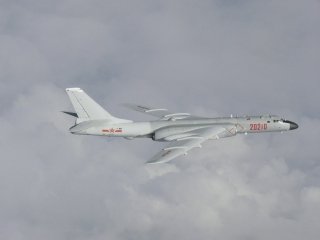 Here's What You Need to Know: Available renderings of the exterior of the H-20 bomber indicate that it has a stealthy configuration. In fact, it looks as though the H-20 has an embedded engine, blended wing body, absence of vertical structures, and engine air ducts woven into the frame underneath the fuselage.

China’s new stealthy Xian H-20 bomber is expected to carry conventional and nuclear weapons and fly at ranges out to eighty-five hundred kilometers, according to the Defense Department’s new report on China.

Beijing’s new H-20 bomber appears to be built to rival the U.S. Air Force’s B-21 Raider bomber. At this point, it is unclear if the two bombers are comparable. The Defense Department’s reports on China’s H-20 bomber note that the new H-20 will incorporate a variety of fifth-generation technologies typically associated with stealth fighter jets.

It’s possible that the H-20 bomber has fifth-generation characteristics such as sensing and artificial-intelligence-empowered computing. Although fighter jets and bombers conduct different missions, both lean heavily on targeting sensors, information processing, advanced software and weapons interfaces.

Available renderings of the exterior of the H-20 bomber indicate that it has a stealthy configuration. In fact, it looks as though the H-20 has an embedded engine, blended wing body, absence of vertical structures, and engine air ducts woven into the frame underneath the fuselage. In contrast, the B-2 Spirit bomber has air ducts emerging from the top of the fuselage. Still, there are many visible design similarities between the Xian H-20, B-21 Raider or B-2 Spirit.

Last year the Defense Department noted in its report on China that “a possible H-20 prototype depicted a flying wing airframe akin to the B-2 bomber and X-47B stealth unmanned combat aerial vehicle.” Perhaps of even greater concern is that refueling capability could “expand long-range H-20 offensive bomber capability beyond the second island chain,” meaning it could hold disputed areas of the South China Sea at risk from the air, according to the Defense Department’s assessment.

The ability to refuel could also substantially change this equation. The Defense Department’s report on China noted that the communist country has developed a first-of-its-kind H-6N refuelable bomber variant. This technology could make it possible for a refuelable H-20 bomber to partake in long-endurance missions. In fact, this may be China’s ultimate plan for the H-20 bomber.

One of the goals of stealth technology is to build an aircraft that can approximate the surrounding atmospheric temperature as closely as possible to remove any detectable margin of difference between it and the surrounding environment while it is flying. Developers of stealth technology regularly seek to create methods for reducing an adversary’s ability to detect high-temperature air from trailing an aircraft.