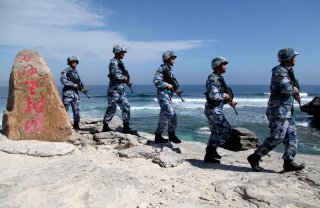 Here's What You Need to Remember: However, according to the U.N. treaty, 12 miles of water off the shore of an artificial structure—something which does not meet the definition of an island—would not be regarded as an extension of a country's territory, Pentagon officials told The National Interest in a background discussion on the topic.

China has for many years now been building new island-like structures, adding airstrips, and placing weapons in and around highly disputed areas of the South China Sea.

As of several years ago, China had already reclaimed over thousands of acres of the area throughout the region, a phony island-building process caught on video by U.S. Navy Poseidon spy planes years ago.

Preferring to call them "artificial features" rather than "islands" or "territories," Pentagon officials say China's attempted island and outpost building does not bolster any legitimate territorial claims in the region -- according to established international conventions.

According to the U.N. treaty, there are no provisions granting rights to waters without regard to land-based sovereign rights. The U.N. treaty specifies that territorial waters extend for 12 miles off of the coast of sovereign territory. This means that, while other countries have a right to peaceful innocent passage within the 12 miles, the waters are regarded as an extension of the territory of the country, a Pentagon official explained.

However, according to the U.N. treaty, 12 miles of water off the shore of an artificial structure - something which does not meet the definition of an island-- would not be regarded as an extension of a country's territory, Pentagon officials told The National Interest in a background discussion on the topic. Many countries in the region have claimed or developed outposts in the South China Sea, but nothing compares to the scope and degree of China's activities. Senior Pentagon officials say that in the Spratly Islands, Vietnam has 48 outposts; the Philippines, eight; Malaysia, five; and Taiwan, one.

The U.N. treaty also specifies that up to 200 miles off the coast of a country is considered part of an economic exclusive zone, or EEZ. This means the host country has exclusive first rights to resources and any economic-related activities. Therefore countries cannot, for instance, fish in the waters of an EEZ or set up an oil-drilling effort without securing the permission of the host country. However, activities within an EEZ that do not relate to economic issues are allowed as part of the freedoms associated with the high seas, Pentagon officials told The National interest.

It is likely a pretty safe assumption that uncertainties related to the South China Sea are likely to be addressed by the now underway Pentagon China Task Force, as its focus is reported to be grounded upon maintaining stability and freedom of navigation in the region. A Pentagon report citing the start of the task force says the new China Task Force plans to finish its work in about four months and maintain a focus of ensuring stability in the volatile region.

“At the end, DOD officials want to provide Austin with specific and actionable recommendations and milestones to meet the China challenge. Over the years, there have been many initiatives that addressed growing Chinese provocations in many areas. The secretary wants an assessment of the best ways to defend the international, rules-based order that has kept great-power peace since the end of World War II,” the Pentagon report said.