Chinese Hypersonic Missiles Present A Deadly Threat in the Indo-Pacific 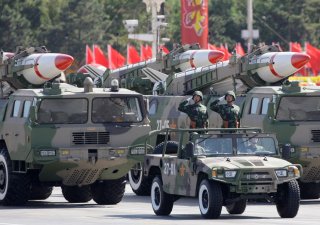 Here’s What You Need to Remember: The DF-17 missiles are slated to replace some of China’s older short-range ballistic missiles with high-speed and maneuverable hypersonic glide vehicles.

China’s Dong-Feng 17 (DF-17) hypersonic missile was specifically developed to destroy “foreign military bases and fleets in the Western Pacific,” according to the Defense Department’s 2021 report on the People’s Republic of China (PRC).

“In 2020, a PRC based military expert described the primary purpose of the DF-17 as striking foreign military bases and fleets in the Western Pacific,” according to the report, which is titled Military and Security Developments involving the People’s Republic of China.

The DF-17 missiles are slated to replace some of China’s older short-range ballistic missiles with high-speed and maneuverable hypersonic glide vehicles. So, how far away is China from engineering a hypersonic missile that can hit maneuvering targets? U.S. military officials have routinely stated publicly that the United States has been behind China in developing hypersonic weapons. Could the Chinese already possess hypersonic missiles capable of attacking carrier strike groups on the move in the ocean? It is unknown if China has this ability, but it would not surprise U.S. weapons developers if it did—partly because the United States is pursuing the same technology.

U.S. engineers are currently working on something known as a “tech insertion” and building it into the Army long-range hypersonic weapon and the Navy’s conventional prompt strike weapons, which are designed to fire multiple weapons at once and hit moving targets. Such a technical capacity would prevent ships or ground convoys from avoiding an approaching hypersonic weapon. The Defense Department already has numerous weapons systems able to adjust course in flight to hit moving targets, such as Tomahawk cruise missiles or SM-6 surface-to-air missiles, which have a dual-mode seeker. These weapons systems use two-way datalinks and networked guidance systems to receive updated targeting data and make in-flight changes to track targets. It is unclear how soon the Defense Department will be able to harness this technology and use it at hypersonic speeds. Also, it is unclear if China already has this ability.