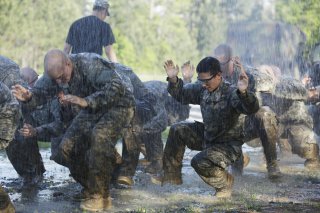 Here's What You Need To Remember: The Army’s most obscure special-ops unit is the roughly 300-strong Intelligence Support Activity, formed in 1981, which has gone by various codenames over the years. The unit’s bland title is belied by its Tier-1 status.

The United State’s Special Operation Command (SOCOM) counts over 70,000 personnel drawn from elite units in the Air Force, Army, Marine Corps and Navy. At times it virtually resembles a fifth service of the U.S. military with its own aircraft, boats and support services.

Special operations forces are employed for high-risk missions where use of blunt conventional firepower is constrained by political or tactical factors, and where finesse and discretion are required. That includes ‘direct action’ missions such as hostage rescue and capture or assassination of critical enemy personnel, as well as communicating with and training regional allies, and performing reconnaissance deep inside hostile territory.

Members of special operations undergo extreme tests of physical and mental endurance as part of their training. Culturally, special ops units place greater emphasis on smarts and individual initiative, and eschew being labeled ‘soldiers’, instead calling themselves ‘operators’ or unit-specific titles like Raider, Ranger or SEAL.

In this first part of a two-part series, we’ll look at the overarching structure of U.S. special forces, and the diverse special operations units fielded by the U.S. Army.

The Elite within the Elite

U.S. special ops units fall broadly into two categories. Tier 2 and 3 units are usually assigned to service- or region-specific commands, operating only under the auspices of SOCOM when coordinating with other special forces units.

Meanwhile, Tier 1 units, also known as Special Missions Units, are directly commanded by the national-level Joint Special Operations Command (JSOC), which undertakes critical, classified missions approved at the highest level. For example, JSOC has organized task forces in Iraq and Afghanistan to hunt down senior leaders of Al Qaeda, ISIS and the Taliban.

The U.S. Army Rangers date back to six battalions formed during World War II. The Fifth Ranger battalion famously scaled a ninety-foot high cliff at Point du Hoc on D-Day to attack Nazi gun batteries, while the First, Third and Fourth were wiped out in the Battle of Anzio.

Today’s Rangers wear a tan beret and are grouped under the 75th Regiment, which itself traces its lineage to Merill’s Marauders, a unit known for its exploits fighting Japanese forces in China.

The regiment’s three Ranger Battalions are organized similarly to a conventional airborne infantry formation, However Rangers undergo a two-month intensive Ranger School where they wilderness fighting skills, with units focusing on desert, mountain and swamp terrain.

The Rangers specialize in combat missions that involve insertion of relatively large units into hostile territory—particularly seizing airports and other key installations, as well as killing or capturing enemy leaders. One Ranger battalion is always on standby for deployment overseas within eighteen hours.

The Ranger Special Troops Battalion includes the elite Regimental Reconnaissance Company with training in underwater as well as airborne insertion. This Tier 1 unit fields six-person teams that can direct air strikes at key targets, or serve as pathfinders that land ahead of an airborne force to locate and illuminate safe landing zones.

First formed in the 1950s, standard Army Special Forces units are popularly known as the Green Berets. Though trained in a wide range of skills, the Green Berets particularly specialize recruiting, organizing and training local forces; and accompanying or leading them in combat operations supporting U.S. objectives. Such local allies could be members of a regular military unit like the Afghan or Iraqi Army, a tribal militia, or even an underground resistance force.

Green Berets famously inserted into Afghanistan in 2001 road on horseback alongside local anti-Taliban fighters, coordinating their ground offensive with U.S. forces, and calling down airstrikes on points of resistance. In the anti-ISIS campaign, Green Berets worked closely with Kurdish militias in Iraq and Syria.

While conventional military units depend on support units for fire support, transportation, medical care and resupply, Green Berets training emphasizes ability to operate independently of such structures for long periods of time as reflected by the sobriquet “Snake Eaters.”

Their training also emphasizes studying local cultures and their language and communication styles. For that reason, it’s sometimes styled a “thinking-man’s special forces”—though the term may need revision, given the branch admitted its first female operator in 2018.

The basic Green Beret unit is the twelve-operator “A-Team,” led by a captain. Six A-Teams are assigned to each Special Forces Company, and seven companies in each battalion.

Special Forces Operational Detachment D (SFOD-D) was founded in 1977, and remains the most elite and secretive of the Army’s special forces units. It focuses on direction action counter-terrorist missions such as hostage rescue and capture or killing of high value targets, as well as protection of high-ranking individuals

Delta operatives train on marksmanship, espionage, tactical driving, demolitions and infiltration skills. You can read more about the unit’s extreme training regimen in this earlier article.

Delta Force is estimated to count roughly a thousand personnel, and has four operational “Saber Squadrons,” each with two assault troops and one reconnaissance troop. Support units include E Squadron, which flies light planes and helicopters on spy missions, G Squadron which performs advanced reconnaissance operations, and a Combat Support Squadron harboring technical specialists in demolitions, signals intelligence and so forth.

In 1980, Delta Force’s first operation, a complicated attempt to rescue hostages in Iran, came crashing down in flames when a Marine helicopter collided with an Air Force refueling plane.

Afterwards, the Army decided it needed an elite helicopter unit to support its commandos and formed the 160th “Night Stalkers” regiment. The 160th has been involved in virtually every U.S. military conflict since, whether inserting Delta force commandos in Grenada, hunting down Iranian minelayers, dropping elite operatives into the war torn streets of Mogadishu, or flying under Pakistani radars carrying Navy SEALS on a mission to kill Bin Laden.

The first battalion of the 160th operates several types of scout/attack choppers. The MH-60 DAP gunships hefts a 30-millimeter chain gun and Stinger air-to-air and Hellfire anti-tank missiles. There are also diminutive AH-6 and MH-6 “Little Bird” choppers that can mount infrared sensors, minigun and rocket pods, and even external seating for up to four commandos.

The Second through Fourth battalions fly MH-60M Blackhawks and heavy MH-47G Chinook transport helicopters. These are specially modified with inflight-refueling capacity, low-altitude terrain-following radars for skimming close to the ground, and fast-rappelling ropes and hoists.

The 160th is also fields a “stealth” Blackhawk model incorporating radar-absorbent materials and other defensive upgrades.

The regiment’s nearly 200 aircraft are rounded out by two companies equipped with MQ-1C Predator surveillance drones.

Whenever the Pentagon need elite helicopter pilots for dangerous and/or clandestine missions, the 160th’s is likely involved.

The Army’s most obscure special-ops unit is the roughly 300-strong Intelligence Support Activity, formed in 1981, which has gone by various codenames over the years. The unit’s bland title is belied by its Tier-1 status.

ISA agents often are proficient in multiple relevant languages, and other skills traditionally associated with civilian intelligence-gathering activities. ISA operatives have scaled mountains in Afghanistan to listen in on Taliban radio communications and assisted with recon prior to the Abbottabad raid that killed Bin Laden.

A companion article will look at Special Operations units of the Air Force, Marine Corps and Navy, as well as recent challenges facing the Special Forces community.

Kyle Mizokami is a defense and national-security writer based in San Francisco who has appeared in the Diplomat, Foreign Policy, War is Boring and the Daily Beast. In 2009 he cofounded the defense and security blog Japan Security Watch. You can follow him on Twitter: @KyleMizokami. This article first appeared in 2019.