Colder Skies: Can the U.S. Air Force Compete over the Arctic? 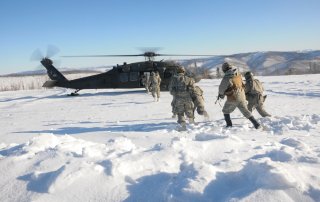 Here's What You Need To Remember: In the Arctic, a theater that may never become an arena for geopolitical strife, U.S. Air Force chieftains seem understandably loath to script out a compelling storyline narrating how U.S. joint forces will crush Russian or Chinese air and sea forces should they get into a scrap.

Behold! The U.S. Army and Air Force are remaking themselves as arms of maritime power even as the Navy and Marine Corps pursue “naval integration.” Prosecuted diligently, these initiatives will produce a single composite weapon for sea war. Prosecuted effectively, they will deter malefactors such as Russia and Communist China from making mischief—and obviate the need to fight.

It’s the feel-good story of the summer.

The latest indicator that the ground-based services have embraced their nautical destiny comes from the U.S. Air Force. Earlier this month Secretary of the Air Force Barbara Barrett and the uniformed chiefs of the Air and Space Forces signed out a Department of the Air Force Arctic Strategy to explain how the flying services intend to do their part to manage polar skies and seas.

The Arctic Strategy is a crisply written document. Its prime goal, explain its framers, echoing the Pentagon’s 2019 Arctic Strategy, is “a secure and stable region where U.S. national interests are safeguarded, the homeland is protected, and nations address shared challenges cooperatively.” They then indulge in a bit of bureaucratic preening, pointing out that the air force is “the most active and invested U.S. military department in the Arctic,” chipping in just short of 80 percent of Pentagon spending for the theater.

The salesmanship is justified in this case, though. The drafters note that the polar expanse constitutes the nexus between two strategic regions, the Indo-Pacific and Europe. Surface traffic can traverse northern routes for more of each year as the ice recedes. More merchant ships will avail themselves of time- and cost-saving voyages between Asia and Europe. Acquisitive seafarers might even try extracting natural resources from the water or seabed.

Military forces will follow inexorably. Now as ever, the flag follows trade. The United States and its NATO allies fronting on the polar sea can either join in or find themselves left behind. This is the unwritten conceit underlying the Department of the Air Force Arctic Strategy.

Russia was the first mover in polar climes. Moscow has invested lavishly (relative to its modest means) in ships and infrastructure to monitor and control its northerly ramparts. Communist China now styles itself a “near-Arctic” power and aspires to chart a “polar Silk Road,” a regular trade route to Europe complete with way stations to support vessels making their way through regional seaways.

More than ever, the Bering Strait, the western entryway to the Arctic Ocean, promises to act as a conduit for commercial and naval shipping traveling hither and yon between the Pacific and Atlantic. Alaska, then, constitutes a strategic frontier for the United States. Its Aleutian chain stands athwart access from the Pacific high seas to the Arctic. It occupies the eastern shore of the Bering Strait, facing Siberia. The Northwest Passage, one of the existing passageways through the Arctic, skirts along the northern Alaskan and Canadian coastlines.

Let’s classify and critique the Arctic Strategy for fun on a steamy day far to the south. First of all, the document’s geographic content sets the heart aglow. It declares in effect that the Arctic commands both offensive and defensive value for the United States. On the offensive side, Alaska’s location helps the U.S. military surmount the tyranny of distance. The state “offers the quickest flight access to strategic locations across the Pacific region and western Russia.” Small wonder U.S. Air Force bombers oftentimes sortie from airfields in Alaska to cruise over the Western Pacific.

Air commanders also plan to make Alaska a hub for stealth fighters, adding new F-35 Lightning II squadrons to the F-22 Raptor contingent already resident there. That, notes the Arctic Strategy, will make the state “home to more advanced fighters than any other location in the world.” In other words, the air force has made Alaska an airstrip from which to project power outward, shaping events in faraway skies and seas.

On the defensive side, however, air-force magnates warn that the Arctic Ocean’s “capacity as a strategic buffer is eroding, making it an avenue of threat to the homeland.” Distance is an antagonist as well as a friend. If Alaska represents the closest point of departure for U.S. forces to deter, coerce, or assault foreign foes, it also affords foreign foes their closest opportunity to menace U.S. territory.

Furthermore, the environment has a peculiar and perverse impact on U.S. Arctic strategy. Climate change is intermittently melting away the ice, rendering polar waters more accessible to surface forces than ever before—including hostile forces. Here’s the perverse part: the United States long treated the region with benign neglect because the North American portion of the Arctic was unusually frigid compared to the European side.

The Gulf Stream warms northern Europe, making for a temperate setting relative to Alaska and Canada. Europeans, including Russians, constructed roads, harbors, and other infrastructure to take advantage of relatively mild surroundings. Americans saw little need to bother. So the U.S. military is playing from behind in the great game to exert influence along the northern periphery.

Second, the Arctic Strategy is rather banal—and the banality is baked into it. As readers of these pixels know, J. C. Wylie partitions military strategy into “sequential” and “cumulative” forms. Sequential strategy means campaigning from points A to B to C, one tactical action after the next, until a force reaches its final goal. Cumulative strategy means mounting lots of minor efforts unrelated to one another in time or on the map, and trusting that these disparate efforts will sum up to major strategic effects.

Patton’s march could be graphed using continuous lines on the map and had a clear destination. It exuded drama and captivated people back home. Westmoreland’s counterinsurgent strategy dispersed ground-force units to fight small-scale tactical engagements in hopes of improving the situation by increments. Plotting these actions on the map implied that no final destination or goal was in view, or even possible. Cumulative strategy is vague and appears directionless. There was no Berlin to march toward in South Vietnam—and thus none of the clarity, drama, and satisfactions that go along with sequential operations.

Peacetime endeavors—including Arctic strategy—are cumulative in nature. Creating a secure and stable region is a strategically defensive aim. It means conserving what is. Acting as a conservator of the status quo means girding to meet a variety of challenges—none of which has manifested itself in full as of yet. True threats may never manifest. The Arctic Strategy’s framers, consequently, are reduced to declaring that the strategy will unfold along four “lines of effort,” namely vigilance, power projection, cooperation, and preparation.

If those abstract, squishy, highly nonlinear endeavors aren’t enough to stir your blood, I don’t know what will.

And yet, again, it’s tough to avoid being vague in peacetime strategic documents. Strategic thinkers debate whether you need an opponent to have a strategy. Many—including yours truly—believe the answer is Yes. The art and science of strategy boil down to positioning superior combat power at likely scenes of action at the right time against the strongest hostile force likely to appear there. How do you measure your forces’ adequacy if you have no idea what they will confront in battle?

During the interwar decades, the U.S. Navy and Imperial Japanese Navy (IJN) planned against each other, not some strawman adversary. The U.S. Navy foresaw sending the U.S. Pacific Fleet steaming on a sequential advance across the Pacific Ocean to succor the Philippines. For their part IJN planners expected to mount cumulative submarine and air attacks on the Pacific Fleet as it came—weakening it until the IJN battle fleet could risk a sequential campaign of its own that would culminate in a decisive clash somewhere in the Western Pacific.

There was concreteness to American and Japanese strategy.

But in the Arctic, a theater that may never become an arena for geopolitical strife, U.S. Air Force chieftains seem understandably loath to script out a compelling storyline narrating how U.S. joint forces will crush Russian or Chinese air and sea forces should they get into a scrap. So air strategists are left with a document unlikely to excite much passion among important stakeholders—including lawmakers who control the public treasury and pay for things like Arctic infrastructure.

It seems there are few discrete and happy endings—like victory over Germany and Japan—in peacetime strategy. Advocacy is hard without a gripping tale to tell.

And third, the U.S. Air Force and fellow maritime forces should look at the situation up north as an opportunity as well as a threat. The U.S. armed forces, it is often said, only play away games. They are the visitor, venturing onto other home teams’ turf. There they have to contend not just with hostile navies but with an array of land-based anti-access weaponry. The Pentagon has struggled with figuring out how to nullify others’ home-team advantage so Washington can get its way in the South China Sea, Black Sea, and elsewhere around the Eurasian periphery.